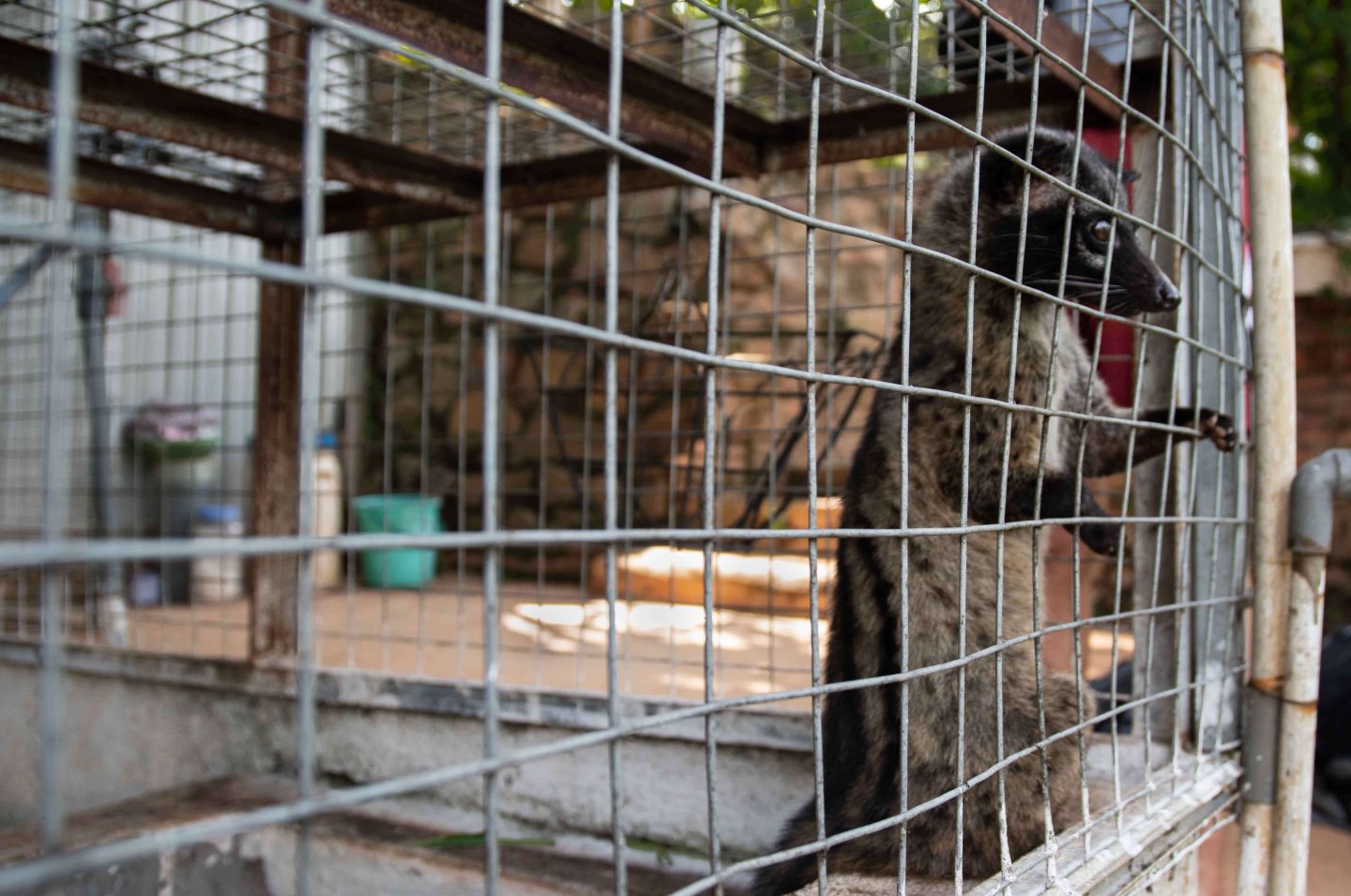 Suffering by the Millions at Atlantic Salmon Hatchery

The infamous “kopi luwak” coffee – also known as “cat poop coffee” – is made from coffee beans excreted by civet cats, who are shy cat-like creatures, and can sell for up to $100 per cup.

Campaigners and animal lovers have long condemned the trade for taking civets from their forest homes and forcing them to live a life of captivity, where they suffer from depression and “zoochosis,” the unnatural, stress-induced behavior characteristic of animals held in captivity for extended periods of time.

“Across Asia, caged civets are being kept in appalling conditions just to produce an expensive cup of coffee,” said Amy Jones, documentary filmmaker, photographer, and co-founder of Moving Animals. “Animals in captivity are denied their freedom and many exhibit abnormal behavior to deal with the stress and anxiety.”

Now, Moving Animals’ latest investigation reveals yet another disturbing dimension in the industry: unable to cope with captivity, these wild civets are driven to self-mutilate and chew their tails down to the near-bone in anxiety and boredom.

The horrific photographs show caged civet cats with painful, raw tails – all so consumers can have coffee made from the cats’ feces.

“It was heartbreaking to see these civets chewing on their already raw and tender tails – I can’t even imagine the pain they’re in, both physically and psychologically,” said Jones.

Since 2018, Jones and Paul Healey have documented some of the most tragic animal farms around the world. Their ongoing project, Moving Animals, focuses on the undeniable suffering of animals in captivity through their work as documentary photographers, videographers, and activists.

Sentient Media sat down with the team at Moving Animals to discuss how they deal with the undeniable suffering they witness on a daily basis.

“Witnessing this much suffering on a frequent basis can be incredibly draining. But all we can do is try to focus on what good the visuals can do—we can’t stop those individual animals from being killed or exploited, but we can try and change people’s attitudes and mindsets, in the hope that one day animals aren’t used as commodities.”

Other undercover investigations by National Geographic, PETA, and the BBC have repeatedly shown “sick, depressed civets suffering from infections and exhibiting signs of zoochosis.” Investigations have also highlighted the corrupt civet coffee industry that tries to hide the cruel reality of caged civets and mislead tourists and consumers.

In 2013, a PETA Asia investigator visited civet coffee farms in Indonesia and the Philippines, two of the world’s top producers of kopi luwak. Undercover footage from these farms – some of which falsely advertise their coffee as “wild-sourced” – shows sick, depressed civets suffering from infections and exhibiting signs of zoochosis, like spinning, pacing, and bobbing their heads in constant, frantic displays of frustration.

In an undercover investigation by the BBC, experts said they were “totally convinced” kopi luwak from caged animals is sold in foreign markets.

Civet cats are wild, free-roaming animals. They’re also climbers whose natural instinct is to climb just about anything – including the metal cages that keep them captive. As seen in Moving Animals’ latest investigations, the cages were completely barren and filthy, with nowhere for them to climb.

Travel companies including Expedia and Viator continue to profit from this suffering. Civet coffee tours are a popular trend across Asia including Vietnam and Bali.

Tourists drive the demand for civet coffee, even though “imitation” brands that mimic the chemical process – without using civets – are popular, and a fraction of the price.

This week, Moving Animals launched a campaign and petition, urging travel companies, Expedia and Viator, to stop profiting from this extreme cruelty.

“We are calling on travel companies, like Viator and Expedia, to stop profiting from this cruel trade, and asking tourists to avoid touring civet coffee farms while traveling in Asia,” said Jones.

Companies like Amazon continue to profit from this cruelty by selling hundreds of real “civet coffee” products to unknowing consumers.

“It is shocking that companies like Amazon profit from selling this product of intense cruelty and we urge them to pull any civet coffee products,” she said.

Moving Animals has been featured on the Independent, UNILAD, Daily Mail, and The Guardian. You can follow their campaign to end the cruel civet coffee trade here.