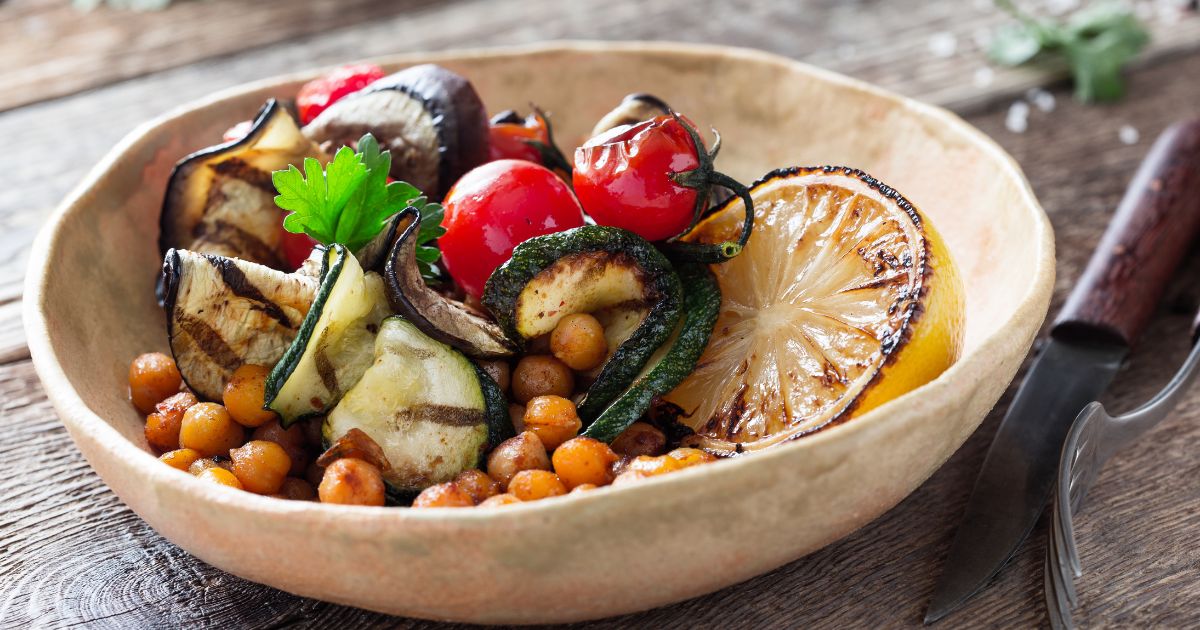 It’s clear plant-based foods have grown in popularity — they’re now more readily available on menus nationwide — yet many dietitians and public health researchers say more needs to be done to increase the public’s intake of fruits, vegetables and legumes. Research shows healthy plant-based diets are associated with lower rates of diabetes, as well as reduced risk for heart disease and some cancers. One way to increase consumption of these foods is by focusing on what’s served in school lunches, and at other institutional meals.

Through a program it calls Universal Meals (UM), the nonprofit Physicians Committee for Responsible Medicine is working to increase the number of universal school meals served, with inclusive menus featuring food that is safe for any diet. The group also is also working on adoption of universal meals at hospitals, prisons and other facilities. Part of the organization’s mission is to promote the widespread adoption of plant-based diets.

What Makes a Meal “Universal”?

“What I love about this program is it brings everyone to the table,” says culinary specialist Chef Dustin Harder, best known for his travel series The Vegan Roadie. Harder became an active part of the UM program about a year ago, contributing recipes and encouraging facilities to begin offering universal meals. The program aims to increase offerings of food “everyone can enjoy,” from those who eat plant-based for the animals, their health or the environment, as well as those who are gluten-free, have medical dietary needs or have a diet that aligns with their religion or culture.

The CDC estimates there are between 150 and 200 fatal allergic reactions to foods in the U.S. year, and around 30,000 cases require treatment in emergency rooms. Harder emphasizes that all of the Universal Meals program’s recipes are “void of the top nine allergens.” Defined by the FDA as milk, eggs, peanuts, soy, wheat, tree nuts, shellfish, fish – and sesame, newly added this year to the Food Allergen Labeling and Consumer Protection Act of 2004.

To Harder, it is not just the absence of common allergens that makes these dishes universal. “I like to think of it as an all-inclusive experience,” he says, pointing out that foods free of animal products can be enjoyed by everyone – not just the 5 percent of U.S. consumers who are vegan. “We’re offering an opportunity for everyone to come to the table because we’re leaving out those ingredients.”

In all, there are more than 160 recipes, some offered in versions scaled up for institutional use, including the Crispy Smashed Potatoes with Sunflower Dill Cream and Pineapple Basil Sorbet.

Some school systems have been actively expanding the plant-based meals offered for student lunches, in an effort to increase equitable access to nutritious foods such as fruits and vegetables and to make their menus more sustainable.

All Washington, D.C. schools must offer a vegetarian meal upon request every day of the week. California’s Oakland school district pledged to reduce meat and dairy offerings by 30 percent in 2013. In 2018, Miami-Dade schools also added more vegan offerings to its menu.

In February of this year, New York City schools launched Vegan Fridays. While the quality and fully vegan nature of the meals served were in question as the program began, the move nevertheless represents a promising shift towards increased availability of plant-based foods in the nation’s largest school district.

More changes may be made to boost the healthfulness of school lunches as the U.S. Department of Agriculture’s new nutrition standards take effect for the 2022-2023 school year. The new rules require that schools serve low-fat or nonfat milks, that 80 percent of grains be high in whole grains and, beginning in the 2023-24 school year, that sodium levels in meals are reduced by 10 percent.

Upon the launch of Vegan Fridays, New York City Mayor Eric Adams said, “We should not be feeding the health care crisis in our prisons, our hospitals and, most importantly, in our schools, so we want to go in a more healthy direction.”

Many university institutions have also been open to the idea. The University of Notre Dame, Dartmouth College, North Carolina State and Washington State universities, as well as SUNY Oswego, all offer dishes that qualify as universal meals. Cornell University is considering doing the same.

According to Harder, the University of Miami “has been with us since the beginning,” with the universal meal pilot program and now offering a qualifying meal every Wednesday.

Prisons, Harder says, have been the toughest to bring aboard the program. The Centers for Disease Control (CDC) has determined that the diets of inmates tend to lack nutrient-dense foods such as vegetables and fruits – and that cost may be a factor in this issue. Although talks are ongoing, there has yet to be a prison with a concrete plan to adopt its meals due to financial concerns. “That’s where the thrifty idea was born,” says Harder. Some of the program’s Thrifty Recipes come in at a cost of less than one dollar per serving.

The lack of nutritious and safe foods in prisons is but one issue in a wider crisis of inequity and oppression in the U.S. system of incarceration. However, the offering of plant-based foods – not required of prisons nationwide – could be one small step in chipping away at a deep and systemic problem.

“Accessing plant-based foods, particularly if prisoners forage or grow it themselves, can provide a way for prisoners to look after their own health and well-being,” writes Claire Hamlett, Associate Editor for Sentient Media. “At the same time, it can enable them to avoid participating in the oppression and exploitation inherent to both the [industrial food system] IFS and the [prison-industrial complex] PIC.”

“The current system of outsourcing food service for inmates encourages spending less on food, which could lead to the purchase of poor quality food,” wrote the CDC.

In the American Medical Association’s (AMA) Journal of Ethics, Drs. Lernard Lesser and Sean Lucan wrote in 2013, “Unfortunately, foods widely believed to be unhealthful are currently abundant in hospitals, and a substantial number of hospitals have fast-food chains operating their cafeterias.”

Because prevention of illness is a “principal focus” in the work of most hospitals, the authors write, the facilities should provide healthful foods. “Given that many leading causes of preventable illness and premature death in the U.S. — obesity, diabetes, heart disease, cancer — are diet-related, it is logical that hospitals have a stake in providing health-promoting food.”

In 2019, the AMA urged hospitals to provide plant-based meals and eliminate processed meats from their menus, among other efforts to “improve the health of patients, staff, and visitors.”

Some believe that a hospital must do more, using food not only to aid patient recovery, but to increase community access to nutritious foods and help keep people healthy. Long Island Jewish Valley Stream hospital (LIJ Valley Stream) created its own garden, growing fruits and vegetables that are fed to its patients. The hospital also features a “food pharmacy,” its effort to provide patients with nutritious foods that align with a prescription written upon discharge. Hospitals, like prisons, may be hesitant to incur the costs of improving the nutritional quality of their menus and providing more food, but as LIJ Valley Stream’s executive director Steven Bello told the New York Times, such efforts may help to cut healthcare costs in the long term.

Lesser and Lucan emphasize the potential health impacts of food choices made by hospitals, noting that the use of dairy produced without antibiotics may help to reduce “multidrug-resistant” bacterial infections. The use of even “responsibly raised” beef, from cows raised on pastures and not fed “unnatural” diets, “might contribute more to greenhouse gas emissions” than other proteins. “Menu selection can have an impact on human, animal and environmental health, and ideally a hospital would do what is ethical for all,” the doctors write.

To Harder, trying to do what is best for every eater, is the idea behind the universal meals program. In hospitals, he says, that could someday take the form of personalized patient menus catering to specific health and dietary needs.

The Physicians Committee for Responsible Medicine is working to bring more universal meals to as many facilities and menus as possible in the coming years in an effort to reach more people. Says Harder, “The goal is to keep growing.”

Why the Business Lunch of the Future Should Be Animal-Free