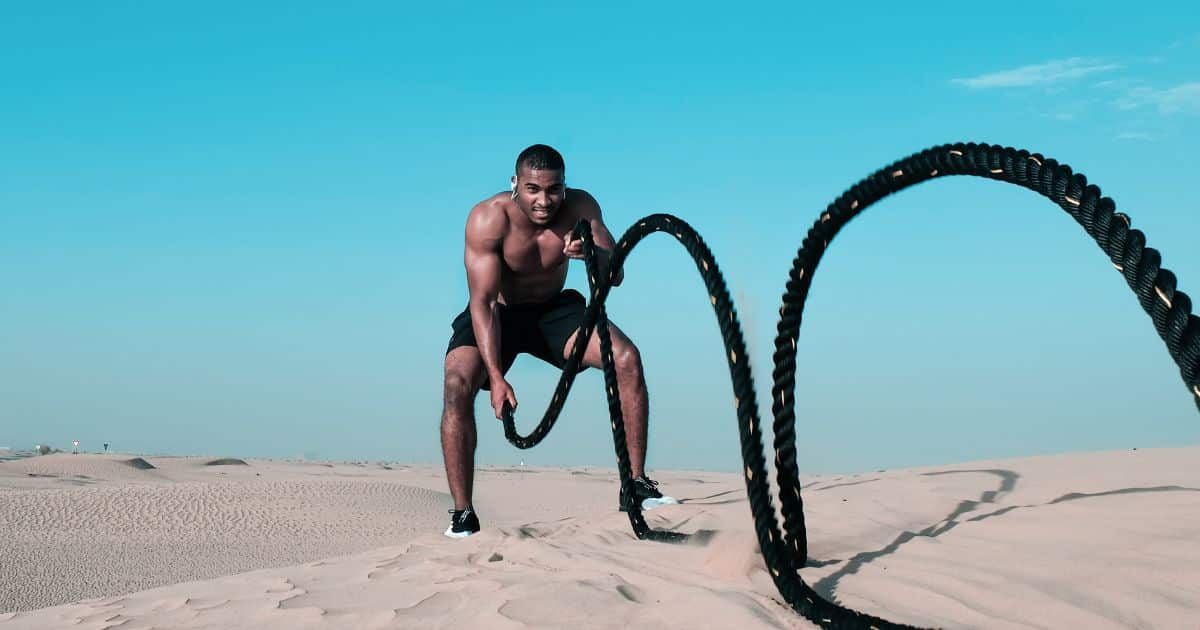 Consuming large quantities of protein is a key component of bodybuilding. The most well-known protein sources are animal products, but in recent years we’ve come to learn that muscle can be built just as effectively by consuming protein from plant-based sources.

Can a Vegan Be a Bodybuilder?

Bodybuilding on a vegan diet might not be conventional, but it certainly is possible. Despite the common misconception that vegan diets are lacking protein, you can meet the body’s protein requirements through purely plant-based sources. Popular sources of protein for vegan athletes include chickpeas, beans, lentils, tofu and quinoa.

Muscles grow by being damaged and broken down when we exercise, followed by building back up stronger than they were before. This growth requires protein, and large amounts of it. The protein can come from animal products but it can also come from a more ethical and environmentally-friendly source: plants.

These male vegan bodybuilders are destroying the myth that muscle can only be built by consuming high quantities of meat.

Nimai Delgado is a bodybuilder who has never consumed meat. After growing up vegetarian, he made the decision to become fully vegan in 2015 and his career continued to thrive. Nimai’s story shows that animal-based proteins are definitely not needed to be successful in bodybuilding.

Zack Belknap is a bodybuilder from Eugene, Oregon who made the switch to a vegan lifestyle after learning about the environmental devastation caused by animal agriculture. Fear of the possible impact on his performance had previously kept Zack from making the change, but some of his greatest bodybuilding achievements came after going vegan.

Greg Lachance is a bodybuilder from Canada. His vegan lifestyle started off as a four-week experiment but the positive health benefits from his new diet persuaded him to make the switch permanent.

Karl Bruder attributes his vegan lifestyle to his wife and to his love of animals. He was also able to gain 6 kilograms in just 20 months of eating only plant-based protein.

Derek Tresize converted to a plant-based diet after finding out about the health risks from consuming large quantities of meat. In addition to his success as a bodybuilder, he is now a personal trainer certified in plant-based nutrition.

Ivan Blaszquez is another athlete who opted for a vegan lifestyle because of the personal health benefits. The bodybuilder says he feels stronger and fitter than he ever did eating animal products.

After being brought up vegetarian and transitioning to a vegan lifestyle in 1998, Torre Washington went on to place in his first bodybuilding competition in 2009. He has been competing successfully ever since.

Health issues were what persuaded Dusan Dudas to turn to a plant-based diet, and he quickly noticed the improvements. After becoming vegan at age 52, he won his latest bodybuilding award at 60.

Alexander Dargatz is a bodybuilder from Germany who decided to transition to a vegan diet after finding out about the welfare issues inherent in animal agriculture. He enjoys the variety he has in his plant-based diet and is keen to encourage others to make the switch.

Joel Kirkilis is another award-winning bodybuilder who lives a vegan lifestyle because of animal exploitation. Like many others, he feels becoming vegan has improved his overall health.

Jim Morris was a legend in the bodybuilding industry when he passed away aged 80. Jim turned to a vegan diet later on in life because he did not feel comfortable supporting the meat and dairy industries and the harm they cause animals.

Vegan female bodybuilders are breaking stereotypes and making it clear that women can have successful careers in the fitness industry without consuming animal products.

Shelli Beecher-Seitzler came into the sport a bit later than most, but feels that her success over such a short period of time has been due to her many years of eating a plant-based diet.

Jehina Malik was brought up as a vegan, getting her protein from soybeans, tofu and other plant-based sources. She began her bodybuilding career at 19 years old and has since competed in several professional competitions.

Newer to the bodybuilding field but an experienced powerlifter, Anastasia Zinchenko moved from being vegetarian to vegan for the health benefits. Over time she has also become more motivated by the ethical implications of animal agriculture.

Jang Ji-Eun lives a vegan lifestyle because of the benefits it has for animals, human health and the environment. Along with her bodybuilding career, she creates social media content encouraging others to try a plant-based diet.

Crissi Carvalho returned to the fitness industry in her 40s after many health issues. During her recovery, she decided to try out a vegan diet, has pursued a successful career as a vegan fitness coach.

Leonore Verheijen decided to become vegan at age 22 when she became aware of the connection between animal agriculture and the climate crisis. She took up professional bodybuilding to prove that animal products were not needed to build muscle.

This Irish bodybuilder followed a vegetarian diet for several years, ultimately becoming vegan, after finding out about the health risks associated with eating large quantities of meat. Kim Constable now runs a fitness program based on living a vegan lifestyle.

Victoria Lissack began her bodybuilding career while eating an omnivorous diet but made the switch to plant-based protein sources for health reasons. What started off as an experiment became permanent as she also learned about the treatment of animals raised for meat.

Vanessa Espinoza is a vegan trainer and nutrition coach with a published book on the subject of building muscle on a vegan diet. She is passionate about sharing with others that animal products are not necessary to build physical strength.

Natalie Matthews is a professional bodybuilder and also a qualified chef. She is passionate about sharing vegan recipes and encouraging others to try out a plant-based diet for animals, the environment and health.

Is It Better To Be a Vegan Bodybuilder?

We don’t have any evidence that muscle is built more effectively on a vegan diet, but we do know that it’s possible to build it just as effectively by eating plants instead of animals. There are also many health benefits to eating a vegan diet, including reducing your risk of heart disease and reducing your risk of developing some types of cancer. In addition to the health benefits, a vegan diet helps reduce our environmental impact and the exploitation of animals.

One disadvantage of only getting your protein from plants as an athlete is that plant-based sources of protein are slightly less digestible than animal sources. Vegan bodybuilders may need to consume more protein sources than a meat-eating bodybuilder in order to build muscle as effectively.

How To Bodybuild as a Vegan

As well as the intensive resistance training that is required of all bodybuilders, vegan bodybuilders need to make sure that they are including a wide range of plant-based protein sources in their diet. The key difference between animal and plant proteins is in the amino acids they contain. Meat proteins contain all nine essential amino acids, while most plant-based proteins are lacking one or more of the essential amino acids. For this reason, vegan bodybuilders, and all other vegans, have to ensure their protein is coming from a wide enough range of sources to avoid becoming deficient in any of these amino acids.

What Do Vegan Bodybuilders Eat?

Most vegan bodybuilders try to eat as varied a diet as possible to ensure that they’re not lacking in any nutrients. Great sources of protein for vegans include lentils, beans, and products made from them, such as tofu. Nuts and seeds are also great options, as well as certain grains such as quinoa, oats and kamut.

A vegan bodybuilder’s diet will contain many of the same components as any healthy vegan diet, including legumes, nuts, seeds and grains that are high in protein. These foods are great sources of the amino acids that are needed in order to build muscle, as well as other nutrients. The only issue is that not many plant-based foods contain all nine essential amino acids, whereas most meat products do.

The amino acid that is most commonly missing in plant-based protein sources is leucine. As this is an essential amino acid and vital for muscle growth, vegan athletes need to make sure their diet includes enough foods that contain leucine. Some of these include soybeans, lentils, mung beans and sesame seeds. Although they provide very little or no protein, fruits and vegetables are also a very important part of any vegan diet since they provide other healthful nutrients.

Many vegan bodybuilders who used to eat meat have seen their careers flourish since turning to a vegan diet, which might have something to do with the general health benefits of eating a plant-based diet. Vegan bodybuilders do need to get protein from a wide range of sources to avoid missing out on any important nutrients.

If you’re interested in trying a vegan diet for particular fitness goals like bodybuilding, it’s important to meet your protein needs with a wide variety of plant-based foods. With a diverse diet, you can avoid missing out on any of the essential amino acids and other nutrients that your body needs. If you feel overwhelmed by the idea of eliminating animal-sourced products all at once, try swapping just some of your meals for plant-based or opting for a vegan diet for a week or a month at a time as a first step.

Vegan Nutrition: How to Stay Healthy on a Plant-Based Diet