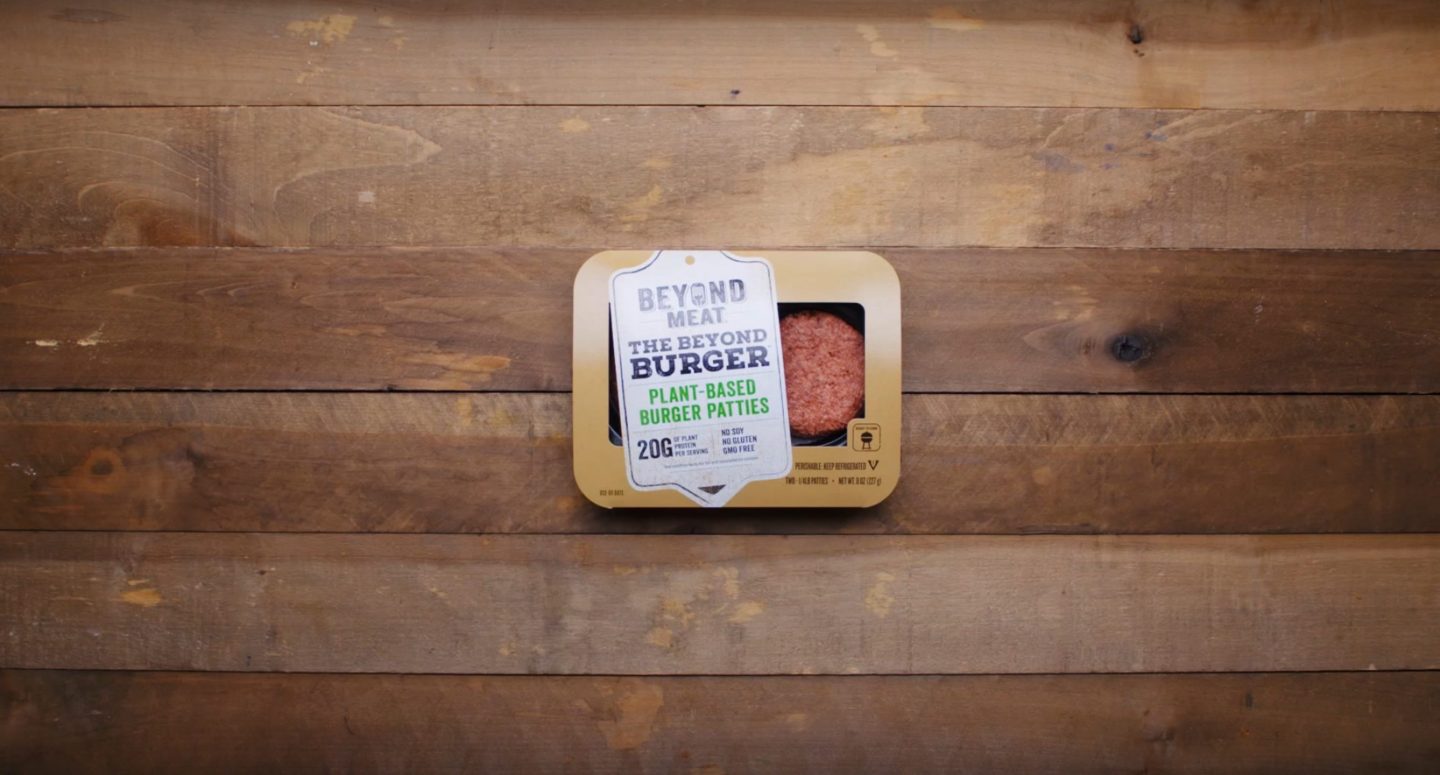 The future of protein is plant-based. Beyond Meat (BYND), the plant-based meat maker famously sold at TGI Fridays, filed paperwork with NASDAQ for an initial public offering of $100 million. This represents the first public stock offering from plant-based food makers targeting meat eaters.

The Beyond Burger looks, tastes, heck—it even bleeds like a cow burger. It also happens to generate 90% fewer greenhouse gases than U.S. beef. And if that wasn’t good enough, the plant-based patty sells for $12.00 per pound and requires 46% less non-renewable energy, 93% less land, and 99% less water than a beef burger does.

Following the announcement that the company will go public, Beyond Meat added two key players to their board: Kathy Waller, CFO and Executive Vice President of the Coca-Cola Company, and CFO of Twitter Ned Segal.

“I’ve been feeding our teenager Beyond Sausage for the past few months without him noticing the swap,” Segal told Meat and Poultry. “I’ve seen the likeability of the product firsthand.”

Time Magazine named Beyond Sausage one of 2018’s Best Innovations. The plant-based meat contains about half the fat and more than a third less saturated fat than the pork option.

Earlier this year, the company tripled their production after opening a second plant in Columbia, MO to meet demand. The Beyond Burger is now available in more than 25,000 restaurants and retailers, including Hong Kong-based grocer Green Common.

Beyond Meat is one of the fastest growing food companies in the U.S. Their success is due, in large part, to the exhaustive research and development of the pea, fava beans, and soy proteins used to mimic the texture and flavor of animal meat by a 40-person team of scientists and chefs. All are free of gluten and GMOs.

The opportunity for investment across alternative meat makers is huge. Quorn Foods boasts the world’s largest vegan and vegetarian meat plant. The UK facility produces 1.33 million packages of micro-fungal protein sausages per week, about the same amount of protein as 1,600 cows.

Quorn Food told LIVEKINDLY they are growing at about 15% each year and don’t plan on slowing down. Recently, they pivoted slightly and began targeting vegans. The move away from vegetarian messaging signals the faith of new food companies in veganism as a lifestyle that requires it’s own place in the market.

Beyond Meat may be the first vegan food company to offer stock in its company to the public, but it certainly won’t be the last. The experts at MarketsandMarkets are calling for the plant-based food industry to grow from $4.6 billion in 2018 to $6.4 billion by 2023.

Where’s all this plant-based funding coming from?

Venture capital firms like Kleiner Perkins (16.1%) and Obvious Ventures (10.4%) both hold a significant stake in Beyond Meat. The plant-based meat maker was valued at $550 million around this time last year.

For the first time, VC firms are starting to differentiate between do-gooders and organic and dairy-free product developers in the food industry. Companies like Beyond Meat and Impossible Foods happen to strike the perfect balance between the two, helping give vegan food its place.

“Like most people, I don’t think I can be easily fooled,” Beyond Meat investor Bill Gates told Forbes. “But that’s just what happened when I was asked to taste a chicken taco and tell whether the meat inside was real or fake. The meat certainly had the look and the smell of chicken. I took a bite and it had the taste and texture of real chicken, too. But I was surprised to learn that there wasn’t an ounce of real chicken it. The ‘meat’ was made entirely of plants. And yet, I couldn’t tell the difference.”

Hippeas (exactly what they sound like, chickpea snacks for hippies) reported a $10 million round from CAVU Venture Partners last month.

Invest in a vegan future

Beyond Meat’s investors are looking to the IPO for more positive signs from consumers. The company proved that its products aren’t just for vegans, it’s for meat eaters too. But if Beyond Meat wants to continue its success, meat eaters will have to invest in a vegan future. As more and more vegan food companies come to market, will meat eaters continue their support?

We hope they do before eating what we love is no longer a choice. Part of Beyond Meat’s commitment to a vegan future is an explicit commitment to addressing these four consequences of animal agriculture: human health, climate change, natural resource depletion, and animal welfare. By building a better, more sustainable meat, they’re well on their way. Who said meat has to come from cows, anyway.

If cattle were their own nation, they would be the world’s third-largest emitter of greenhouse gases. #climatechange #meat

Confidence in the plant-based food industry is soaring. It’s hard to argue with food that tastes like the “real” thing, even if the real thing comes from an animal. A vegan future might not be for everyone, but a sustainable one certainly is. To get there, we’ll all have to go at least part of the way vegan.

It’s happening! The Beyond Burger is already outpacing one restaurant chain’s grass-fed burger by a whopping 40%.

Change can start right now by supporting Beyond Meat in our everyday purchases and by investing in the first publically traded vegan food company’s future.