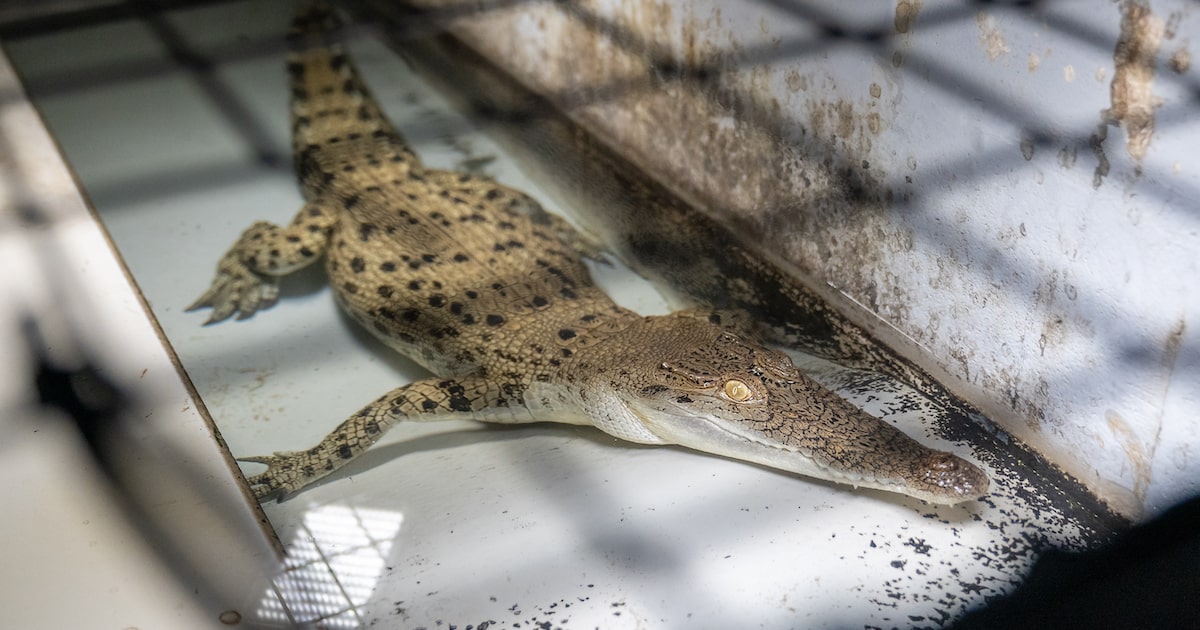 For crocodiles, a luxury handbag is literally to die for. Australian animal protection charity Farm Transparency Project has released whistleblower footage from four intensive crocodile farms in the Northern Territory, exposing one of the darkest corners of the fashion industry. In Australia and other parts of the world, crocodiles are farmed for their skins to be used as leather in belts, handbags, and other fashion accessories, for high-end brands such as Hermès, Louis Vuitton, Versace, and Gucci.

The footage shows row upon row of wild saltwater crocodiles, who would swim long distances if they were free, confined to small barren cages with nothing but a concrete floor and small pool of water. The animals begin their lives in crowded group housing but are reportedly then moved to these solitary pens to prevent any scratches that could devalue their skin and harm profits.

Crocodiles have traditionally been thought of as unfeeling creatures, but a growing body of science refutes this idea. A review of scientific literature on reptile sentience found 37 studies that accepted that reptiles are able to experience “anxiety, stress, distress, excitement, fear, frustration, pain, and suffering.”

The new video, as well as exposing the living conditions, offers a rare glimpse of the way these animals are killed. The crocodiles are first “electrocuted with a prod and dragged from their cages as their bodies convulse.” Next, they are shot in the head with a captive bolt gun, their spinal cord cut with a knife, and a screwdriver driven into the cut “to scramble their brains,” according to the Australian animal rights organization Kindness Project.

The “heartbreaking” hidden camera footage appears to show “some crocodiles breathing rapidly, and even trying to stand, minutes after they have been through this excruciating ordeal,” suggesting that they remained conscious throughout. In the wild, crocodiles have a lifespan of around 70 years, but those raised for leather face slaughter when they are just two or three years old.

Following the release of the footage, Kindness Project is launching a campaign to urge Hermès to stop selling crocodile leather. “We cannot stand by and allow luxury fashion houses to use and abuse our precious native wildlife to appease the fashion appetite of the world’s elite,” says Alix Livingstone, Kindness Project’s Campaign Director. “These iconic animals must be protected from commodification and violence.”

Three or four crocodiles can be killed to make just one status symbol handbag. “The average person could never afford these products,” says Livingstone. “It highlights a level of inequity when we are selling our native wildlife’s skins for handbags that retail for tens, if not hundreds, of thousands of dollars and we have people living below the poverty line.”

The Guise of Conservation

Crocodile farming is a highly secretive industry, one that many people might not realize even exists. In areas where the public is aware of it, factory farms hide under the cover of conservation to make themselves seem more acceptable. “It’s ludicrous to suggest that they could be conserving wild populations by factory farming 100,000 crocodiles per year,” says Livingstone, adding that the industry claims of conservation are nothing more than “ethics-washing.”

“A common misconception within the public is that the industry is acting to cull crocodiles and keep population numbers down. This however is untrue; the industry itself has stated that the wild harvesting of crocodile eggs has no bearing on wild population numbers as they are taken at a time in the lifecycle when those eggs likely would not have survived in the wild,” she says.

Even if it somehow was conservation, is that really a valid excuse for what crocodiles endure on these factory farms? “This is an unacceptable way to treat any animal,” says conservationist Chris Darwin, a descendant of Charles Darwin, commenting on the footage as part of Kindness Project’s campaign. “You wouldn’t ever treat a dog that way, so why could you treat a crocodile that way? It just seems totally unfair.”

Welfare standards within the industry are so low that what Darwin calls “unacceptable,” is currently perfectly legal in Australia. Livingstone says that when it comes to animal protection, crocodile ranching is just like any other form of factory farming. Rather than safeguarding animals, the Australian Government’s Code of Practice On The Humane Treatment of Wild and Farmed Australian Crocodiles allows Hermès to make claims of “high welfare,” a “science-based approach,” and “responsible sourcing.”

This new investigation comes at a time when other high-end fashion brands are moving away from animal skins. Chanel, Karl Lagerfeld, and Mulberry are among those to have already banned the use of exotic leather in their products. Hermès, however, is planning a new crocodile farm that could become the biggest of its kind in the Northern Territory, holding as many as 50,000 crocodiles. “In a time where we have access to innovative, sustainable, and animal-friendly materials, it is unacceptable for luxury fashion houses to be subjecting animals to a life of misery and a brutal death to make accessories,” says Livingstone.

As part of its campaign, Kindness Project has published a new report outlining how the leather industry in Northern Territory can move away from crocodile farming to instead producing solar energy, plant leather, and crops. Australia accounts for 60 percent of global crocodile skin production, with around two-thirds of this produced in the Northern Territory. Taking into consideration the economic benefits and employment opportunities farms bring to local communities, the organization believes that a just transition is possible.

“There are clear paths forward to move away from this unethical industry whilst still ensuring those it employs in this country are not left behind,” says Livingstone. “Our transition plan identifies a number of opportunities in the Northern Territory to not only ensure people would not be put out of jobs, but actually create more.”

As fashion photographer Alexi Lubomirski puts it, “Why are we still choosing the inhumane torture of animals to clothe us when we don’t need to?”

Kindness Project invites you to join the kinder fashion movement and tell Hermès to #dropcroc.

Inside the Dark World of Rabbit Farming