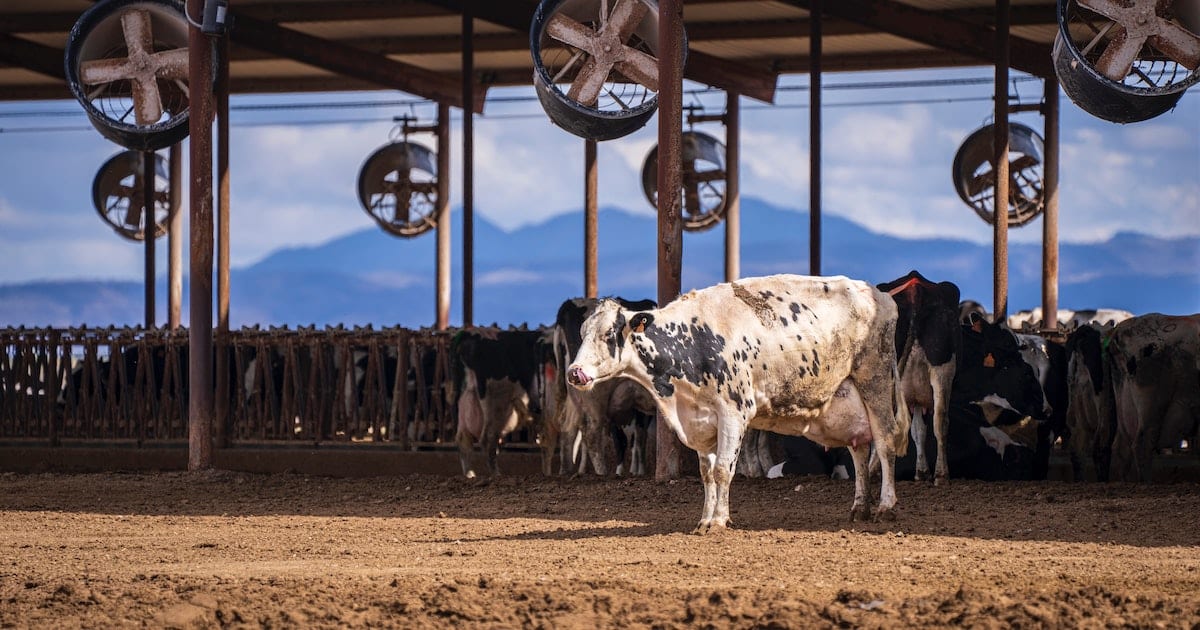 Milk, cheese, yogurt, cream—foods made from dairy products are standard in households around the world. But the way these foods are made is bound up with the physical and mental anguish of dairy cows and their young. Dairy cows produce over 70 pounds of milk every single day for the first few years of their lives before being slaughtered because their bodies cannot keep up with our demand for cheap dairy. Young male calves are torn from their mothers and sold to be slaughtered for veal.

What Type of Cow Is a Dairy Cow?

Cows of every breed produce milk for their young, but those used in the dairy industry have been bred over hundreds of generations to produce very large amounts of milk, making them more efficient for farming than other breeds. Dairy cattle in the United States tend to be one of seven breeds: Ayrshire, Brown Swiss, Guernsey, Holstein, Milking Shorthorn, Jersey, or red and white. The breed that people are most familiar with is Holstein, as they sport the black and white coat for which dairy cattle are known. Holsteins are also the most commonly raised dairy cow breed and have been bred to produce the greatest quantity of milk.

To produce milk, dairy cattle need to be impregnated. The typical dairy cow is bred every single year, giving her body no break from producing milk or carrying a baby. Though the cows have several calves while they are being used for milk production, they do not have the opportunity to raise them. The young are taken from them mere hours after birth so that the milk can be bottled and sold in stores.

Do Farmers Force Cows to Get Pregnant?

Farmers typically use artificial insemination to get cows pregnant. This procedure consists of inserting one gloved hand and arm into the rectum to apply downward internal pressure, causing the cow’s vulva to open. Once the vulva has opened, a long catheter is placed into the cow’s body. When the tube is close to the cervix, the hand in the rectum is adjusted to grab hold of the cervix and manipulate it to provide entry for the fumbling catheter. In addition to the artificial insemination itself, cattle are also brought into heat when the farmer stands to profit the most. This manipulation of the cow’s body is often performed by farmers or other staff on the farms and not by veterinarians.

How Long Do Cows Produce Milk For?

Cows typically produce milk for about 10 months after giving birth. Dairy cows are often allowed to live for about four years before being slaughtered and sold for ground beef because they no longer produce enough milk to be profitable. In contrast, the natural lifespan of a cow is about 20 years, with one cow, Big Bertha, living to an astonishing 49.

When Do Cows Stop Producing Milk?

Roughly 10 months after giving birth, the cows will stop producing milk. At this point, cows tend to be well advanced in their next pregnancy. Most cows are bred again while they are being milked so that they will have a “dry” period of just a month or two in which they are not producing milk before once again giving birth and starting the cycle all over again.

Do Cows Feel Pain When Milked?

Milking a healthy cow is not painful and may actually be relieving due to the sheer volume of milk that the cows produce without their calf present to relieve the pressure. The period right before the cow is expected to give birth, in which she is “dried off” and no longer milked, is stressful and can be very painful for the cow. Many farms will abruptly stop milking cows which leave their bodies producing milk with no outlet, causing engorgement and pain. The milking process for cows who are suffering from mastitis—inflammation of the mammary glands—is painful, and the resulting milk cannot be bottled and sold to stores.

What Problems Can Forced Milk Production Cause?

There are several factors that can cause infertility in dairy cows. Not least among these are improper insemination techniques. Inseminating too early, too late, incorrectly, and using damaged containers of semen are all reasons why a cow can lose fertility. Once a dairy cow loses fertility she loses value and will be slaughtered, as she must be able to get pregnant to produce milk.

Estimates suggest that lameness impacts up to 26 percent of all dairy cattle around the world. In intensive systems of dairy production, this number climbs. In the United Kingdom lameness likely impacts in the region of 29.5 percent of cows, while in the U.S. one 2013 study found a 48.6 percent incidence of lameness in its sample population of dairy cows. There are a number of risk factors for lameness including diet, calving, use of hormones during calving, type and cleanliness of flooring, and place in the social hierarchy.

Mastitis is one of the top three reasons that dairy cattle are killed. The disease consists of inflammation in the mammary glands of cows. Mastitis can be transmitted between cows or picked up in the environment.

What Happens to the Calves of Dairy Cows?

A weaning ring is an alternative to removing calves from their mothers within hours of birth. It consists of a hard, spiked ring that is clamped onto a calf’s nose. If the calf attempts to suckle from their mother the weaning device causes pain to the mother and her sensitive udder, causing her to move away or kick. Though calves fitted with weaning rings are able to stay with their mother for a longer period of time, they are placed in a dangerous situation in which they could end up being kicked.

Male calves are either killed at a young age and sold as veal or they are raised to about a year old and slaughtered and ground into hamburger meat. In the latter scenario calves are castrated, typically within the first few weeks of life. This procedure can be done in one of three different ways: surgically, with a band, or by crushing the spermatic cord. Often the procedure is done incorrectly when the calf is young and it is first attempted, and farmers will redo the procedure when the calf is older and the stress and pain are increased.

Disbudding consists of removing or preventing the development of the horns of the calf. The procedure is typically performed at a young age on calves that will be slaughtered at around a year and sold as ground beef, as well as on those that will become part of a dairy herd. The methods that are commonly used are burning, caustic paste, cutting with a tubular blade, gouging, and keystone. The procedure is usually performed in the first few weeks of the calf’s life.

Still a common practice in some parts of the world, including the U.S., tail docking is meant to prevent injury, maintain a clean udder, and improve milk quality and hygiene. The procedure is done using cauterizing docking irons, elastrator bands, emasculators, or surgery. Tail docking has been tied to acute and chronic pain, physiologic stress, and disease, and it likely prevents the cattle from expressing normal behavior.

Dairy calves require at least 10 percent of their weight in milk every day in order to grow healthily. A 90-pound Holstein calf will need 9 pounds or 4.5 quarts of milk per day. As a result of intentional breeding intended to increase milk production and maximize profit, Holstein cows produce about 75 pounds or 9 gallons of milk every single day.

What Happens if a Cow Does Not Produce Milk?

If a cow is not able to produce milk or is not producing enough milk to remain sufficiently profitable, they are slaughtered. Following their slaughter, the cow’s body is typically ground into hamburger meat.

How Are Dairy Cows Slaughtered?

Once transported to the slaughterhouse, the dairy cows walk one by one down a chute. They are stunned, typically by blunt force trauma. Due to inordinately high line speeds, often the trauma to the head is done incorrectly and is not successful. Their neck is then cut, whether they are awake to feel it or not, and they die over the next several minutes.

One of the most common responses heard by vegans when they tell people about their diet is “I could never give up cheese; I love it too much.” I have to agree with this sentiment. I love a big bowl of macaroni and cheese or a grilled cheese sandwich. Thankfully, we are able to still enjoy these delicious, feel-good meals without subjecting cows to a life of suffering on a dairy farm. We are free to choose a delicious plant-based cheese alternative or make a sauce out of cashews and other dairy-free foods. Enjoying good food shouldn’t mean that animals on factory farms are forced to suffer.