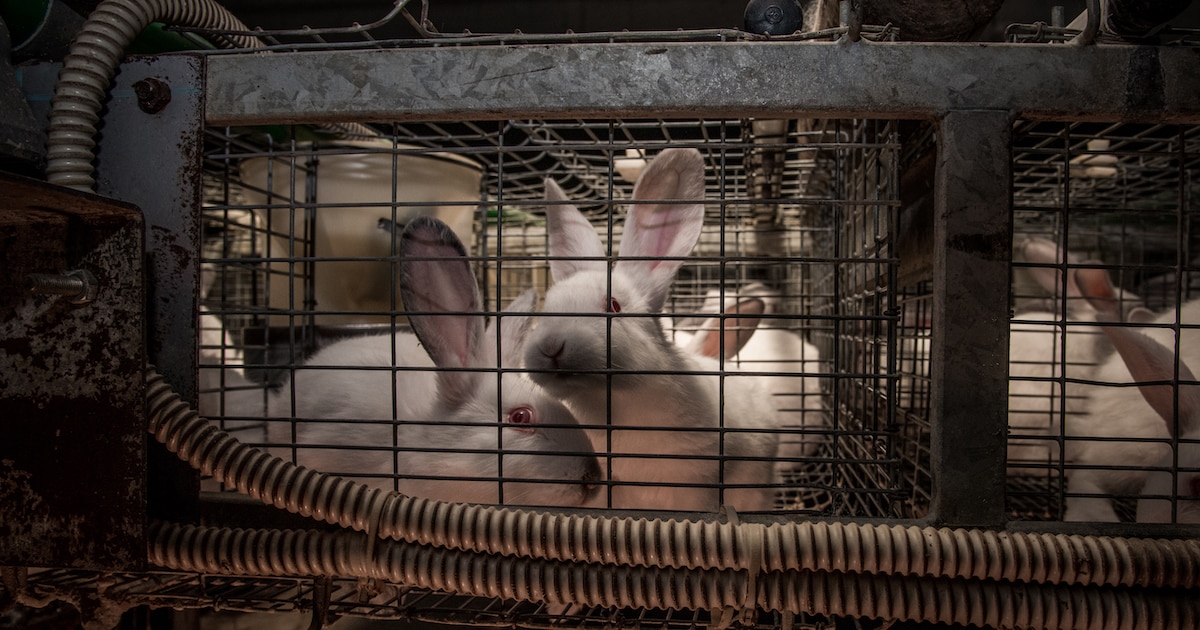 If he was wild, he would be digging in his burrow, learning to forage, and playing with his siblings. But confined to a tiny wire cage, he cannot even hop. And he is not the only one. The room is stacked from floor to ceiling with cages just like his. Some rabbits try frantically to escape whilst others are too scared to even move.

Although many of us think of them as cute, fluffy pets, over one billion rabbits are slaughtered for meat each year. The shy, quiet, and gentle nature of these animals make them easy to exploit.

As people become more aware of how beef and pork production is damaging the planet, rabbit meat is being promoted as a healthier, more sustainable choice. But behind closed doors, rabbits are suffering immensely at the hands of those who see them as mere units of production.

To a lot of people, keeping a bunny in a cage may not seem wrong. This feeds the misconception that rabbit is more ethical than other meat. But rabbits are intelligent, have sentience, and are more complex than we might realize. To be happy and healthy, they require a high level of care—so much so that veterinary professionals class them as exotics.

Although domesticated, they have many of the same behaviors as their wild counterparts, the European rabbit. They love to run, jump, dig and forage. As a naturally social species (unlike cottontails), bonded pairs or groups will play with and groom each other. When bunnies feel happy, they binky—twisty leaps that can look almost like dancing.

Kept in tiny, wire cages smaller than an A4 sheet of paper, rabbits in an intensive farming environment are denied all joy in life. A large number resort to stereotypic behaviors such as gnawing on the bars of their cages and pulling out their own fur. As many as a thousand breeding does and twenty thousand meat rabbits may be crammed into a single shed. Because rabbits have such a strong sense of smell, being in such close proximity with large numbers of other rabbits is overwhelming to their sensory systems and causes severe stress.

Earlier this month, the European Parliament voted to ban cages for all farmed animals in its member countries. This could improve the lives of the 94 percent of farmed rabbits in the European Union currently confined to cages. The agreement, however, was not legally binding, and would not come into place until 2027.

And even free-range is not always so idyllic as it sounds. Earlier this year, animal protection charity Animal Aid went undercover at a farm owned by the UK’s largest rabbit meat and fur producer. Despite being free-range, the rabbits were confined to small, barren, hutches.

Rabbits are fragile animals and intensive farming of the species has a high mortality rate. Although they are often slaughtered as young as eight to twelve weeks old, as many as 15 to 30 percent die before even reaching this age. This is largely due to poor health, commonly respiratory and intestinal diseases.

The wire mesh flooring of cages can cut into a rabbit’s paws. This is uncomfortable at best and is known to cause an illness known as sore hocks. Like other farmed animals, rabbits are fed hormones and antibiotics, are artificially inseminated, and have been bred to produce unnaturally large litters. This puts so much strain on their bodies that breeding does have to be replaced each year.

In the EU, meat rabbits, also called fattening rabbits, are often hung upside down for electrical stunning before slaughter. As prey animals, rabbits are scared to be lifted off the ground, so hanging like this is terrifying for them.

In the United States, rabbits, like poultry, are exempt from the Humane Slaughter Act. The rabbits do not need to be stunned before slaughter and an inspector is not required to be present. This leaves them vulnerable to the worst kind of abuse.

In 2015, investigators from animal protection charity Last Chance for Animals went undercover at a Pel Freez processing plant in Arkansas, the largest rabbit slaughterhouse in America. The workers did attempt to stun them with the dull edge of a knife but many of the rabbits remained conscious. Their legs were then broken, and they began to scream. Finally, shackled upside down, their heads were cut off. This was prolonged by the use of a blunt knife.

Last Chance for Animals said, “Instead of a swift death, many rabbits undergo vicious sawing and hacking, drawing out their already barbaric end. Rabbits are normally silent creatures; it takes a lot for them to cry out. Their final screams indicate they are experiencing extreme pain.”

Although rabbit meat is less harmful to the environment than beef, it still has a significant climate impact. Despite being considered the most sustainable meat, its carbon emissions per kilogram of protein are thought to be higher than both pork and chicken.

Just 212 grams of rabbit meat can produce as much as one kilogram of greenhouse gases. This, for example, makes it almost five times as polluting as lentils.

Rabbits are small, but they consume a surprising amount of food. It takes an estimated four pounds of feed to make just one pound of meat. This means that producing crops, such as rye, wheat, and barley, for rabbit feed may compete with growing these foods for human consumption. When kept in large numbers, rabbits also produce a high concentration of ammonia, which causes poor air quality.

Although most farmed rabbits are raised for meat, these gentle creatures are used for other products too and are generally kept in the same environment.  Contrary to popular belief that fur is just a by-product of meat, raising rabbits for their fur is an industry in and of itself because the two use different breeds.

Fur rabbits are subject to much of the same treatment. To allow their fur to grow thicker, they are allowed to live longer than fattening rabbits, but this usually just means that they will suffer for an extended period of time.

Although rabbits naturally molt and are not killed, angora wool is not necessarily ethical. They are bred to have unnaturally thick coats which are then sheared or plucked. Either way, the rabbits are restrained, and their fragile bones are easily injured by rough handling. Because of their small size, they are hard to shear, and the fact that they have particularly thin skin makes them vulnerable to cuts and grazes. Furthermore, ninety percent of angora comes from China, where rabbit farming is unregulated.

Seemingly harmless, the pet industry can slip under the radar, but an unknown number of baby bunnies are mass-produced in rabbit mills—intensive breeding units that are very similar to the factory farms of the meat and fur industries.

An investigation by PETA Germany, in 2015, exposed “harrowing” conditions at mills supplying the European pet industry. Dark warehouses were filled with small plastic boxes. Bred in these overcrowded containers were rabbits, guinea pigs, hamsters, and other small pets.

Many were sick, starving, or dehydrated, and investigators found freezers full of dead animals. Others were simply left to rot in amongst those who were still alive.