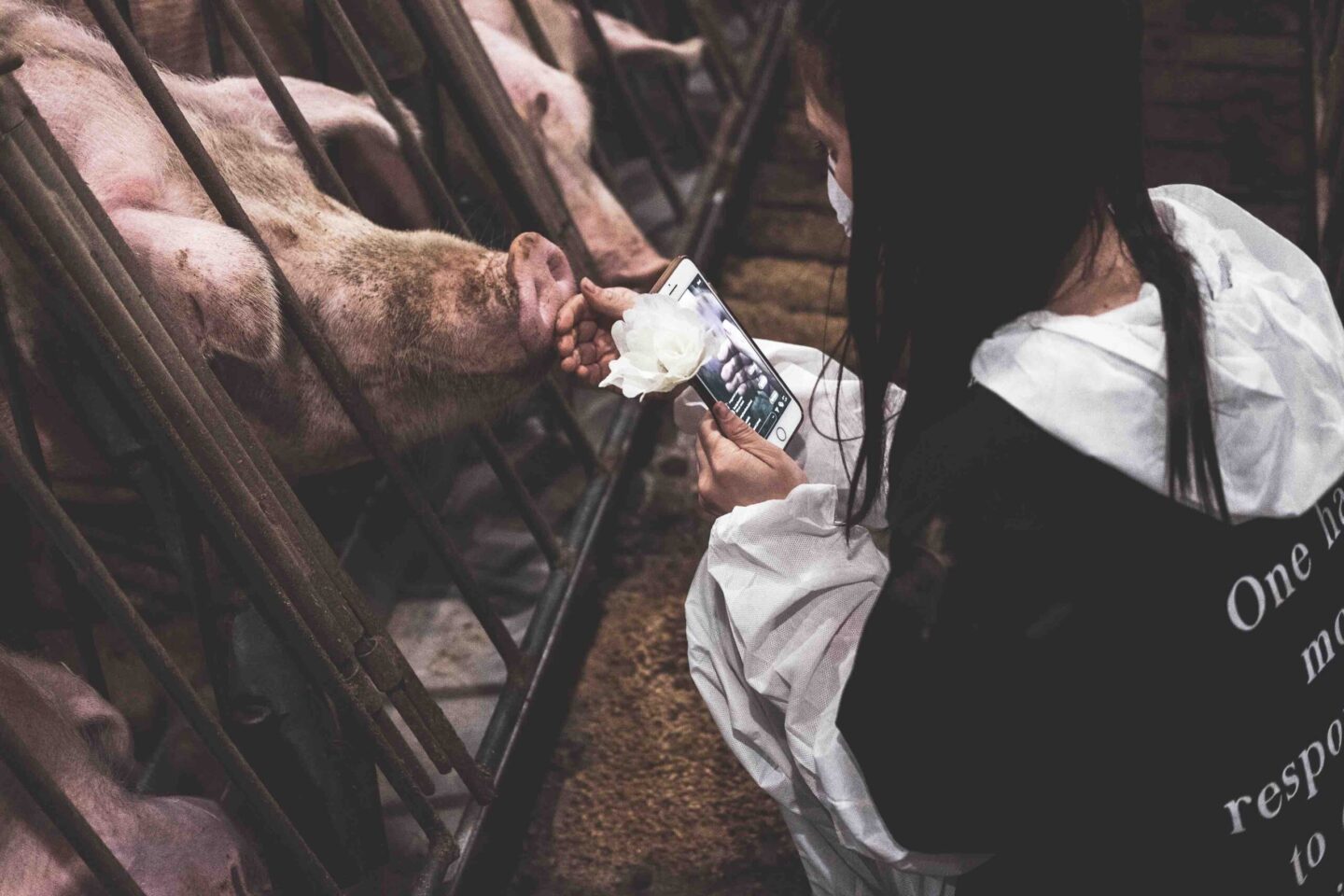 The Power of the Pitch: Top Journalists and Editors Discuss How to Craft the Perfect Pitch

On June 17, 2020, the Ontario government passed Bill 156, an ag-gag bill that criminalizes whistleblowing on factory farms. Under Bill 156, it is now illegal for anyone to take photographs of animals in transport or approach the truck to give them water before they die. The new legislation also targets journalists, whistleblowers, and investigators, preventing them from exposing animal cruelty on farms and in slaughterhouses. Amy Soranno is one of the many investigators fighting back, with the support of the Canadian Association of Journalists, the Canadian Civil Liberties Association, and thousands of activists who believe the law poses a serious threat to free speech.

In a new video, Soranno walks us through her life as an animal rights activist—organizing Canada’s first mass farm occupation Meat The Victims and uncovering the hidden lives of exploited animals in the food system through in-depth investigations into some of the country’s largest animal farming operations. Soranno also discusses the state of animal rights in Canada, or rather, a lack-there-of, and how the animal agriculture industry has implemented ag-gag laws in provinces across the country.

Following the video’s release, we chatted with Soranno about Ontario’s new ag-gag law and what the further criminalization of on-farm activism in Canada means for the rest of the animal protection movement.

Sentient Media: What is Bill 156, and what does it mean for animal rights activists in Ontario?

Amy Soranno: Bill 156 is an “ag-gag” law, which makes it illegal for employees and the public to film and expose animal abuse on farms. Despite already having trespass laws in Ontario and a significant lack of transparency on farms, Bill 156 was rushed through to specifically target activists and whistle-blowers.

Additionally, Bill 156 also restricts the right to peacefully protest and bear witness to animals during transport to slaughter, making vigils in Ontario illegal.

Bill 156 is similar to ag-gag laws that have been struck down as unconstitutional in Idaho, Utah, Iowa, Kansas, and North Carolina because it attacks freedom of expression and investigative journalism. Bill 156 was also opposed by Canadian Journalists for Free Expression, the Canadian Association of Journalists, and the Canadian Civil Liberties Association over concerns that it violates the Charter-protected right to free expression, among other issues.

Similar ag-gag laws are being introduced and implemented into provinces across Canada, including Alberta, and my home province of BC. These Bills would increase penalties for people who attempt to rescue animals from harm, and would implement higher charges for those who trespass onto farm properties, like hundreds of thousands of dollars in fines or years in jail… This is for entering a business and taking out your phone to record. These new Bills are one of the biggest threats to Canadian farmed animals right now. Not only are the animals being silenced, but now so are their advocates.

2019 was a monumental year for the animal liberation movement in Canada, the Meat The Victims action in Abbotsford, BC sparked inspiration across the country, leading to farm and slaughterhouse occupations in Alberta, Ontario, and Quebec. It’s no doubt that those actions played a huge role in the creation of these new ag-gag laws.

The animal agriculture industry wants to scare animal activists away from escalating their tactics or taking part in direct action because they recognize that these actions are highly effective. My hope is that Bill 156 (and other ag-gag laws) will have the opposite effect, lighting a fire within activists to fight even harder, challenging Bill 156 in court, and fighting for animals to be protected under the law.

These ag-gag laws are solely about hiding what happens to animals within farms, transport trucks, and slaughterhouses. This is an industry that relies on secrecy. They rely on their customers believing the imaginary marketing they perpetuate—such as the “humane” lie. However, activists threaten these lies being exposed. A simple video clip from within a local farm, animal hauler, or inside a slaughterhouse reveals the truth that they have hidden for far too long.

In 2019, you were arrested after organizing and participating in Canada’s first mass farm action. Can you tell us a little bit about what happened? Do you think the arrests were warranted?

Every activist who was inside the farm during Meat The Victims were arrested, they had their information documented, then they were all free to leave, except for myself. The Abbotsford Police requested that I be the last to leave the barn, and upon my arrest, I was taken into custody and I’m now the only person facing charges.

Since Meat The Victims on April 28, 2019, there have been new developments of additional arrests and search warrants on other people, who the Abbotsford PD believe are involved in the Excelsior case.

Do I think that non-violent activists, who are seeking to protect, help, and prevent the unnecessary killing of animals, deserve to be punished? Absolutely not. That sounds absurd! I believe the Binnendyk brothers, and the workers at Excelsior, should be charged for criminal animal cruelty of which has been clearly documented on their farm. Along with that, the BC Pork Producers Association and the BCSPCA should also be under scrutiny for corruption and neglectful mishandlings of animal cruelty investigations.

Really, all of us need to be held accountable for allowing society to breed and slaughter animals needlessly. We are all complicit unless we are trying to end it.

How do you think the farm owner and the hog farming industry, in general, viewed the action?

I can imagine that the Binnendyk brothers, who own and operate Excelsior Hog Farm, were quite worried to see activists occupying their farm. Not out of fear for their own personal safety, but fear of their industry being exposed. Farmers realize that once the public sees the reality, they will no longer support it. These industries so strongly perpetuate the “humane myth” with labels such as free-range, grass-fed, organic, and local all used to deceive and mislead the public. The industry also utilizes propaganda in ads, packaging, and even in movies & TV shows—depicting an unrealistic vision of what farming truly isn’t. This lie becomes deeply ingrained in our cultures and beliefs, to the point where we don’t question it. But, living in this lie is such an injustice to the victims, it is a necessity for activists to disrupt normalized violence and create tangible change for animals.

Ultimately, Meat The Victims isn’t about farmers or individual farms, the aim of these actions are to expose the reality of what is happening to the animal victims and challenge the current mindset within our society.

You risk a lot to be on the front lines. But to the average person, including me, storming a factory farm sounds absolutely nerve-wracking. How do you mentally prepare for an action? What other preparations do you make? And who do you look to for support in times like this?

I personally don’t think anyone can mentally prepare for actions like Meat The Victims. No matter how many animal exploitation facilities I attend, the realities are always shocking, even though much of the horrors are the same. When it comes to witnessing the torture, confinement, mutilations, pain, disease, and death that are rampant on every standard animal farm, there is no way to mentally prepare or heal from that. It truly is a form of trauma. But that is exactly why I, and all of us, must be there. Gaining emotional support for this type of work can be tricky because unless someone else has witnessed the same atrocities first-hand, I’ve found it’s difficult to obtain understanding from others regarding these experiences.

The truth around how animals are bred, raised, and killed in the agriculture industry is intentionally hidden from us. This is an industry that operates on complete secrecy. Without whistleblowers and activists going into these exploitation factories and documenting the truth, the public would never truly know. But ultimately, if you’re an activist that does rescues, investigations, and actions such as Meat The Victims, it will forever weigh on you mentally. But my mental strain, from witnessing another’s suffering, should never stop me from trying to help them. No legal, physical, or mental consequences could ever compare to what exploited animals are forced to endure. Therefore, I feel it is my duty to do everything I possibly can to end this.

As activists, we must embrace the uncomfortable, and push through our fears, for those who need us the most. The animals that are brought into this world, just to end up on someone’s plate, are the most vulnerable and innocent beings on this planet. That is why humans take complete advantage of them and force them to withstand the most horrific things, just for our pleasure. It is unjustifiable violence and murder. This industry must be exposed, and the animal’s stories must be told, regardless of how nerve-wracking we may feel doing it.

What was the first protest or demonstration you ever attended?

The first protest I ever attended was at the Kelowna RibFest, which is a traveling festival that glorifies the consumption of pig’s bodies and takes place annually across Canada. This first protest was rather short and uneventful, but we have continued targeting RibFest every year since, including locking down Interior Saving Credit Union this past November, which is RibFest Kelowna’s title sponsor.

What would you like other activists to take away from your work?

Courage is contagious. If we refuse to let our fears guide us, our actions can not only help animals immensely but inspire a growing movement to take bold action together. I hope that my work, and the work of others, will inspire people to get involved in activism, and I hope to inspire activists to get involved in civil disobedience. Throughout history, civil disobedience has been vital in propelling other social justice movements forward, and I believe the animal rights movement is no different. You don’t need to have certain credentials to be an activist, I’m just a normal person, anyone can do what I do. I hope more activists will become comfortable with the uncomfortable, to produce change. Changes won’t happen overnight, but if we are consistent and brave, we will end this madness for animals.

What Are Ag-Gag Laws?