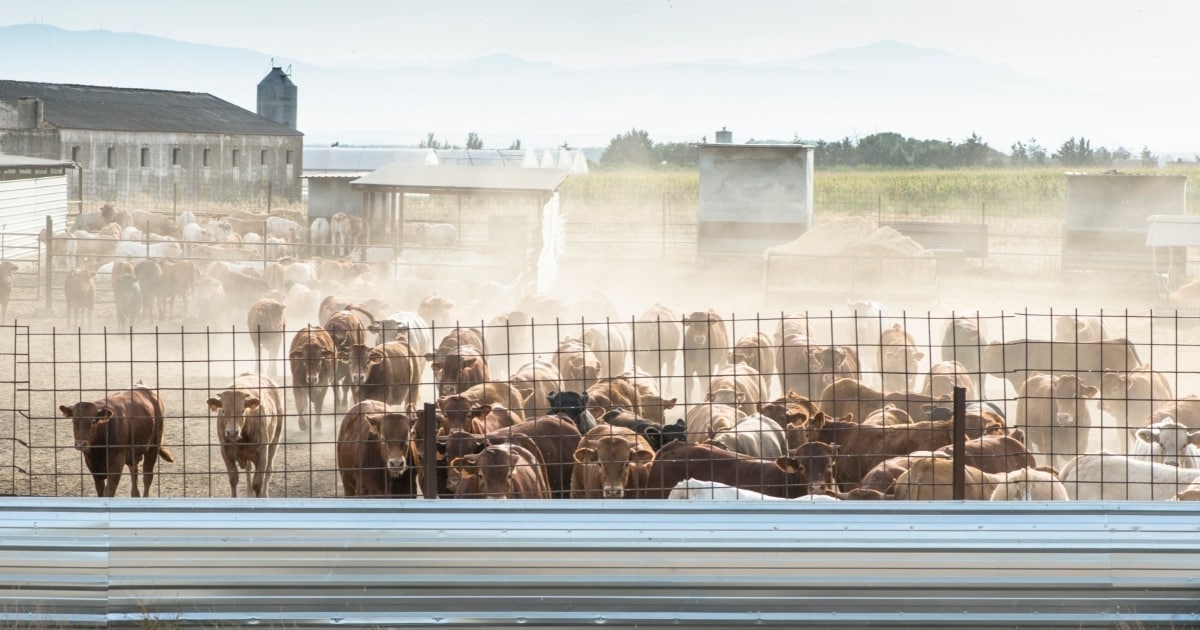 A recent report titled “Meat Atlas 2021” illustrates how political inaction continues to enable the expansion of large-scale meat and dairy companies despite the sectors’ proven climate and health impacts.

Jointly published on September 8 by Heinrich Böll Stiftung, a political foundation tied to the German Green Party, and environmental NGOs Friends of the Earth Europe and Bund für Umwelt, the report warns that in order to reach the Paris climate targets and the UN Sustainable Development Goals, “we will have to reduce the amount of meat we produce and consume.”

The report was released just two weeks prior to the start of the UN Food Systems Summit, a much-anticipated meeting of world leaders “setting the stage for global food systems transformation to achieve the Sustainable Development Goals by 2030.”

Growing numbers of animals are raised intensively for food

According to the report, global meat consumption has doubled over the past two decades, reaching 320 million tonnes in 2018.

The report attributes the increased productivity of animal agriculture to technological innovations and growing numbers of animals being raised intensively in indoor settings or on densely populated feedlots, with 75 billion animals being killed for food every year.

Without political intervention, the Organisation for Economic Co-operation and Development (OECD) and the UN’s Food and Agriculture Organization (FAO) expect meat production to increase to 366 million tonnes per year by 2029.

“The enormous increase of meat consumption and production will prevent the world from reaching the Sustainable Development Goals (SDGs) in 2030,” Dr. Christine Chemnitz from Heinrich-Böll-Stiftung, co-author of the report, told Sentient Media. “The countries in the Global North will need to reduce their meat consumption at least by half in the coming years if they want to fulfill their fair share of the goals.”

“And this is not only about the climate crisis,” Chemnitz said. “Industrial livestock also massively destroys biodiversity and puts global health under pressure. ‘Less and better’ has to be the new narrative. And the world has to understand that cheap meat is not a promise of luxury—its severe collateral damages pave the way to the destruction of our planet.”

The report warns that the expansion of animal agriculture entails severe environmental consequences, pointing out that livestock farming and soybean cultivation are the two main drivers of global deforestation.

Feed crop cultivation, in turn, is driving global pesticides use which has doubled since 1990. Currently, 4 million tonnes of pesticides are sprayed on crops each year—a large proportion of which are considered highly hazardous to human and environmental health. The three largest soybean producers, the U.S., Brazil, and Argentina, account for 70 percent of this pesticide use.

According to the report, livestock’s share of global greenhouse gas emissions is understated. It estimates that industrial animal farming could be responsible for up to 21 percent of greenhouse gas emissions, taking calculations by the Intergovernmental Panel on Climate Change (IPCC) and an Oxford University study into account.

To illustrate the enormity of livestock emissions, the report points to a 2018 study produced by the nonprofits GRAIN and the Institute for Agriculture and Trade Policy (IATP) in 2018. The GRAIN/IATP study found that the world’s top five meat and dairy producers—JBS, Tyson, Cargill, Dairy Farmers of America, and Fonterra—produce more combined emissions every year than oil industry giant Exxon.

The report also warns that the expansion of the livestock sector risks global health crises, including drug-resistant bacteria and zoonotic spillover similar to the COVID-19 pandemic.

Seven hundred thousand people already die every year due to bacteria resistant to antibiotics. According to the World Health Organization (WHO), using antibiotics in livestock in such a manner is threatening their effectiveness in humans.

A 2020 study by the NGO Germanwatch identified antibiotic-resistant pathogens in 51 percent of chicken samples from large poultry producers sold by supermarkets such as Aldi and Lidl in five E.U. countries. Around 35 percent of samples from the study contained pathogens resistant to so-called Highest Priority Critically Important Antibiotics (HP-CIAs), emergency antibiotics that should only be used in human medicine as a last resort when other antibiotics show no effect, according to the WHO.

The Meat Atlas report further shows that the expansion of the livestock sector increases the likelihood of outbreaks of zoonotic diseases. According to a 2019 study published in Nature, agricultural drivers such as land draining and deforestation were associated with a quarter of all diseases and almost half of all zoonotic diseases that have emerged in humans over the past 80 years.

A common thread running through the report is a lack of political action to hold companies responsible for their climate and health impacts.

“Our governments haven’t done anything about this,” said Chemnitz at the launch of the report. “We are talking not about a lack of information and politicians not acting because they don’t know. We are talking about a lack of political will to steer or transition the agriculture sector into a climate-friendly and biodiversity-friendly direction.”

“Very few companies even report their emissions,” said Shefali Sharma, director of the IATP and co-author of the report. “They are not even required to publish standard methodologies for reporting their emissions, so they can pick and choose if they do report and how they do want to report these emissions. Most of them don’t actually have any climate targets on the biggest part of where their emissions come from: their animals.”

The report’s call for holding livestock companies accountable is joined by hundreds of civil society groups worldwide boycotting the UN Food System Summit over concerns that corporate interests have hijacked its agenda.

A recent investigation conducted jointly by Sentient Media and DeSmog exposed how animal pharma group HealthforAnimals lobbied to garner support to increase the sales of animal pharmaceuticals to farmers in emerging markets ahead of the summit. A second investigation by Greenpeace UK found meat industry groups calling on the UN to back the expansion of intensive livestock farming despite the UN’s own panel on climate change calling for reduced global meat consumption.