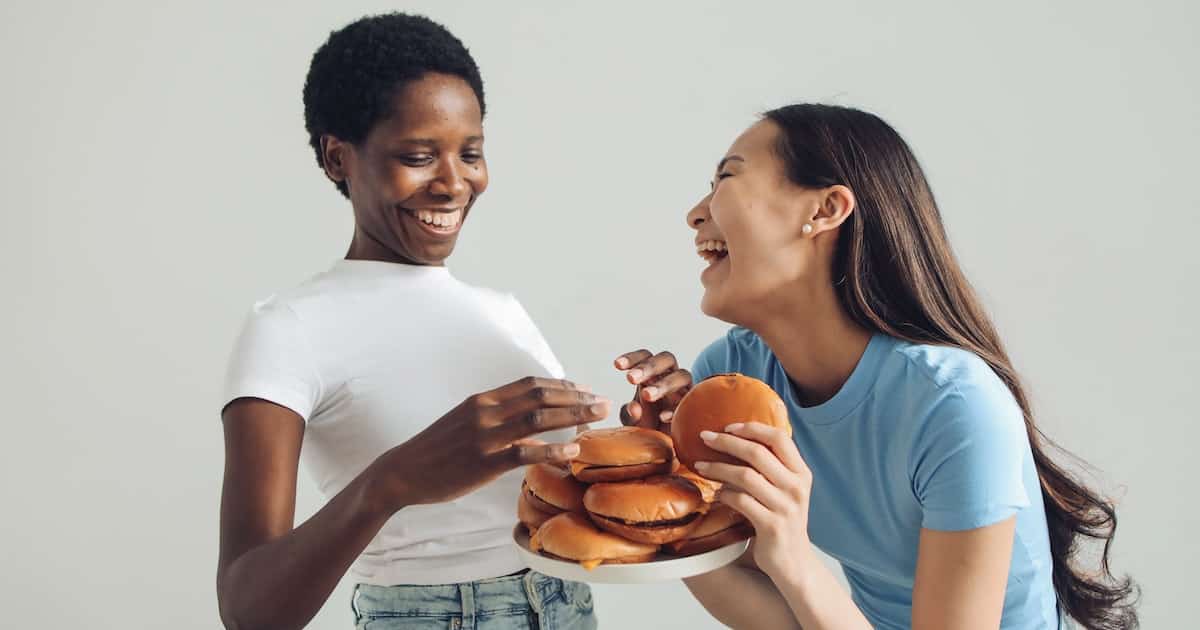 The popularity of meat substitute products in supermarkets in the United States and around the world is growing—whether you call them vegan, alternative proteins, meat alternatives, meat-free, plant-based, or mock meat.

What Is Vegan Meat?

Vegan meats mimic or take the place of meats. They help people participate in meat-eating cultural practices—like having family and friends over for a barbecue—while making ethical food choices.

Meat is usually made of muscle—the parts of an animal’s body that allow it to move. Veganism encourages people to avoid eating or using things that come from animals, including insects.

To remove meat from a vegan diet means finding other foods that compete with meat in taste, texture, smell, look, cooking style, and nutrition such as protein content and vitamins.

What Is Vegan Meat Made of?

Grains (e.g., wheat, soy, rice, millet), legumes (e.g., soy, peas, beans), and other vegetables are the primary ingredients listed in the products below. Other typical ingredients include flavorings, minerals, fats, and colorings. Lab-grown meats are made of animal products.

Below is an extensive list of vegan meat products available in retail food spaces for consumers in the United States. Product information for specific products was generated based on a review of company websites.

The aroma of dry black beans laced with garlic powder, oil, cumin, and salt rises from a steaming Instapot-like rice cooker. The sizzle of onion slivers in a steel pan sets the stage for a can of black beans, a bay leaf, tomato sauce, and other spices. Beans served over rice are a staple food in Brazil and other Latin American countries—and are also a complete protein, according to Healthline.

Vegans can be caught red-handed, too, and not just when they are cutting up beets. California-based Beyond Meat targets omnivores and sells their blood-colored, plant-based meats in the meat sections of stores. The company is known for very closely approximating the taste, look, and texture of real meat served in the form of burgers, meatballs, sausages, ground beef, and crumbles. Beyond Meat uses pea and rice proteins and non-GMO ingredients.

In the family tree of vegan burgers, Boca burgers are Beyond Meat’s parents, or grandparents, and have been around since 1993, according to the Sun-Sentinel. Rather than try to replicate the flavor of meat, Boca burgers are better described as veggie patties. Boca is a subsidiary of Kraft Foods Inc. and is based in Wisconsin. Some of Boca’s plant-based meats are vegan, including chicken patties, veggie burgers, and crumbles. Boca offers original and non-GMO soy versions of its patties and burgers.

Soy curls are celebrated for how quickly they can be prepared for the table as a tasty, nutritious, chicken-like protein. Soak the curls in water or a broth for 10 minutes, and they are ready to be seasoned or stir-fried, according to Bon Appetit. Butler Foods LLC is based in Oregon. In addition to the non-GMO curls, the company offers jerky and crumbles.

The Field Roast Grain Meat Company’s CEO David Lee says that their products draw from ancient Asian and European culinary traditions, crediting Buddhist monks for developing grain meats, or wheat gluten, in a 2017 interview with FoodNavigator-USA. Lee chooses to decenter animal flesh as the standard for nutrition in Field Roast products and aims for sensational flavors, smells, textures, and looks that highlight the unique attributes of grains, vegetables, and other plant-based, natural ingredients, according to FoodNavigator-USA. In the interview, Field Roast’s CEO notes that the word meat is often defined as anything that is edible or “solid food” in English dictionaries.

Vegans looking for American frozen comfort food for their air fryer can get it with a snip of a resealable bag. Gardein’s Ultimate Plant-Based Chik’n Tenders are crunchier and bigger than their original crispy tenders and beg to be put to a taste test against the real thing. Meanwhile, their Mandarin Crispy Chik’n includes a thin, syrupy sauce with which to drench McDonald’s-style chicken nuggets.

According to the Food Empowerment Project, Gardein is owned by a Conagra subsidiary. Their vegan products are classified as chick’n and turkey, beefless and porkless, fishless, soups, meals, and plant-based jerky on their website, but ingredients are not listed on their website.

Kellogg’s subsidiary Gardenburger line has a vegan, plant-based burger geared towards retail customers: Black Bean Chipotle Veggie Burger. According to the Oregon Historical Society, the original, vegetarian Gardenburger was invented in the 1980s by Paul Wenner.

In YouTuber EN Media Productions’ video review, the skillet-cooked, slightly crispy burger is described as a 9 out of 10: “It has a hint of spice behind it. It tastes a little bit like black beans. […] It’s even got some brown rice in it.”

Arriving on the food tech scene in 2011, two years after Beyond Meat was founded, it can sometimes be hard to tell Impossible Foods from one of its closest meat-replication competitors. California-based Impossible Foods offers vegan burgers, sausages, and ground pork. Read more from Thrillist on the difference between Impossible Foods and Beyond Meat, including a note on the former’s decision to test its heme protein on rats.

Amidst brightly lit arrays of supermarket food retail spaces, vegans in the refrigerated section can often find refuge by seeing LightLife tempeh. Eight out of ten dollars spent on tempeh in the United States were spent on Lightlife products, according to Greenleaf SPC’s president in an article in the trade magazine Meat+Poultry. Lightlife’s tempeh bacon strips are crisp and smoke-flavored, according to Shape.

In 2018, the STLToday reported that Missouri was the first state to restrict how plant-based meat makers labeled their foods. Now Missouri-based Hungry Planet, Inc.,’s line of Match Meats is known as Hungry Planet meats. Hungry Planet offers plant-based beef, pork, chicken, crab cakes, and sausage. In a 2020 PlantBased Love YouTube video, one of the reviewers says of the ground chicken that they transformed into a breaded chicken patty sandwich, “Popeye’s who?”

Memphis Meats plans to make and sell meat that is “grown completely from animal cells […] without the need to raise animals and not a plant-based meat alternative”, according to DeliMarketNews.

Now known as UPSIDE Foods, the company seems to be focusing on chicken. It does not yet have any products available for purchase listed on its website. The company is based in California.

MorningStar Farms’ FAQ on its Kelloggs.com says that it plans to make all of its foods vegan “by the end of 2021.” The Kellogg Company is based in Michigan.  MorningStar’s vegan products include two types of vegan burgers—Meat Lovers and Veggie Lovers—and a cheeseburger. Other vegan products include sausage patties, sausages, chicken tenders, chicken nuggets, chicken patties, corn dogs, appetizers, veggie meatballs, and crumbles.

Nasoya Foods USA, LLC, a California-based company, is part of Pulmuone Foods USA, Inc., a subsidiary of Pulmuone Holdings Co Ltd, a Korean food and drink company. It sells tofu in a spectrum of firmness and softness, as well as prepared foods such as marinated tofu, Superfood Skillets, and dumplings.

According to PhoneyBaloneys.com, the company stopped fulfilling orders and ceased production in 2019. The company was based in California, according to Happy Cow and Good Saint. Johnna’s Kitchen has a coconut bacon recipe that tries to achieve the flavor of the original product.

According to History of Macrobiotics (1715-2017), Ray Reichel began making and selling seitan in 1983. He used “tamari, kombu seaweed, and water” for its broth and learned to make it from cookbooks while he was unemployed, according to the book. Ray’s Seitan can be purchased in the eastern United States, according to its website. The company is based in Pennsylvania.

Seitan is also known as wheat gluten. According to Environmental Nutrition, it was invented during the sixth century in east Asian countries like China and Japan.

Seitan is made by using water to remove the starch from a dough made of wheat flour. The result is a gluten protein that competes with chicken and beef in protein content, texture, and how it cooks.

Sophie’s Kitchen is a food tech company that is based in California, according to the Straits Times. The company offers plant-based seafood, including shrimp, crab cakes, fish fillets, smoked salmon, and tuna. Founder Eugene Wang also founded Sophie’s BioNutrients, a business-to-business company in Singapore, according to FoodIngredientsFirst.

Tempeh is a high-protein, fermented soy product originally from Indonesia. Its structure resembles tightly-packed styrofoam—visible chunks of fermented soy that seem glued together.

The Herbivorous Butcher is based in Minnesota and, according to StarTribune, won a legal battle against Nestle to make the term “vegan butcher” a trademark-free term.

According to Medium, founders Kale and Aubry Walch also plan to open an animal sanctuary.

Tofu is a soy product that is made with curdled soy milk, similar to how cheese is made of curdled cow’s milk. It originates in Asian countries and has become popular throughout the world. It comes in soft and firm textures.

Plant-based offerings from Oregon-based Tofurky Company were in the news in 2020 for defending free speech using the court system. According to Vox and Reuters Legal, Tofurky has been fighting state laws that restrict how vegan meats are labeled.

In 2020, AntiRacismDaily analyzed how, in response to community complaints, Trader Joe’s realized that it was time to scrap its racist food labels. Trader Joe’s is a grocery store chain in the United States that is owned by German company ALDI Nord, according to Wikipedia. The company offers plant-based chorizo, two types of protein patties, falafel mix, and vegan marshmallows. Its vegan products include prepared dishes such as Chicken-less Mandarin Orange Morsels, and a canned sauce, and Greek Chickpeas with Cumin and Parsley. Read more about one former employee’s account of being a grocery store worker during the COVID-19 pandemic here.

“That extruder heats and steams the protein isolate and forces it through a hot extrusion,” Sauce Stache says. “When the protein hits the air, it expands and forms a very fibrous, very chewy-like substance.”

Textured vegetable protein, Sauce Stache says, is used in the Beyond Burger, the Impossible Burger, and in non-vegan meat products including school lunches, some beef patties, and canned beef chili. TVP is a trademark of the Archer Daniels Midland company, which is why the ingredient is listed using other names.

In a 2019 interview, Upton’s Naturals is based in Illinois. Its plant-based offerings focus on jackfruit, banana blossom, seitan, and meals. The range of seitan offerings spans chicken, bacon, sausage, and ground—including chorizo. Its vegan meals include three types of soups, Thai Curry Noodle, and Massaman Curry.

Westbrae Natural is a canned food brand whose beans are sold in popular food retailers in the United States. Its canned beans consistently get the best scores from the EWG Food Score database that evaluates products based on nutrition, processing, and ingredient concerns.

Imagine products are also made under the Westbrae Natural Inc. label, a subsidiary of New York-based The Hain Celestial Group, Inc. Imagine products include mushroom-flavored gravy and plant-based broths that mimic chicken broths.