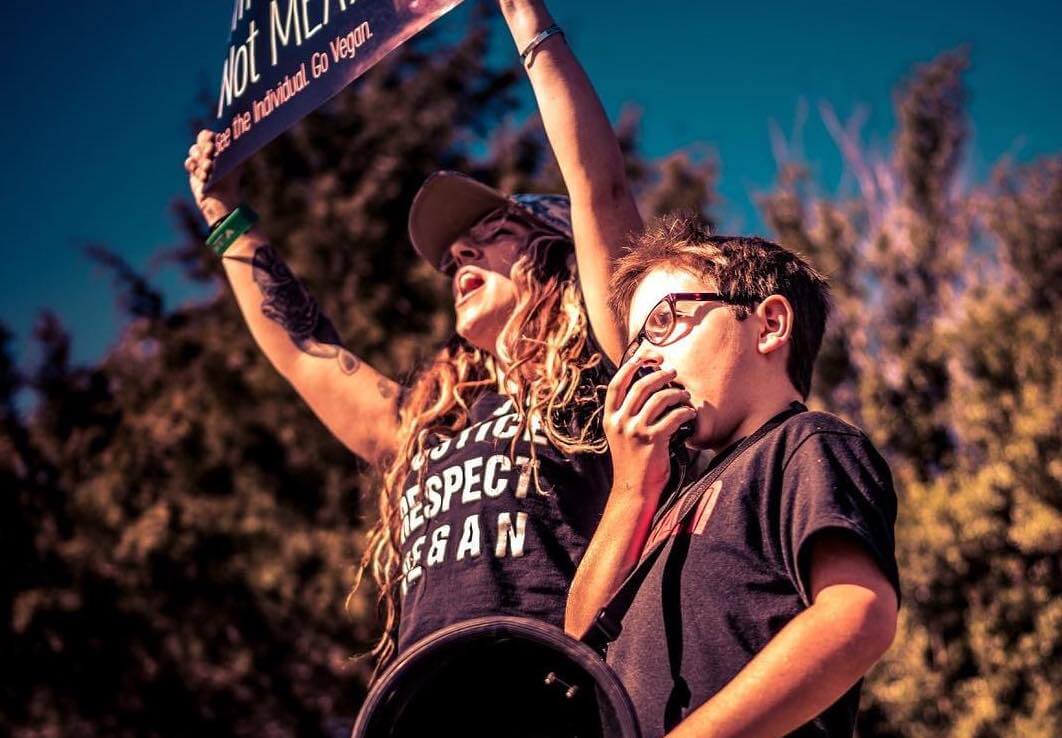 Nine years into life and VeganEvan is changing the world for animals. As an activist he leaflets, participates in marches and protests, disruptions, vigils, and he is not stopping there.

On Wednesday, October 9, VeganEvan graduated from the Main Street Vegan Academy in New York. He is now the youngest certified Vegan Lifestyle Coach and Educator (VLCE), an accomplishment he is proud to have achieved.

“It makes me really happy to have the certification. I learned so much through the academy, and I think I am going to be able to help a lot more animals because of it,” said Evan LeFevre, who goes by VeganEvan. His mom, Shannon Blair, also obtained her certification.

Main Street Vegan Academy’s mission is “to encourage the adoption and maintenance of a positive vegan lifestyle and a health-promoting diet, geared to the needs and preferences of the individual.” Since its founding in 2012, the academy has certified over 450 activists from 28 different countries around the world.

The mother-son duo wanted to earn their certifications as they look to become more strategic with the activism they do.

When Evan was only 4-years-old, he was a vegetarian and already becoming an activist, speaking for the first time at a local Earth Day event in his hometown. Not long after, he began engaging in speaking opportunities and becoming more involved in the animal rights movement. Evan was crowned the ‘Cutest Vegan Kid’ of 2016 by PETA, and appeared in many news articles thereafter, gaining popularity and support for his actions.

To receive the VLCE certification, activists must complete six days of intensive training where they learn principles that will assist them in advocating for a vegan lifestyle. Topics that are covered in the curriculum range from nutrition, vegan law, and sustainable fashion, among many others. By the end of the academy, graduates are armed with the tools to spread compassion and kindness through their activism.

The certification will also help Evan and his mom be seen as more credible activists.

Doctors, dieticians, chefs, business people, and many others who are well-established professionals in the vegan community speak throughout the academy. Shannon and Evan heard from activists like Michael Suchman, co-founder of the popular blog VeganMos; Robert Ostfeld, MD, board-certified cardiologist and Director of the Cardiac Wellness Program at Montefiore Medical Center; and Joshua Katcher, author of Fashion Animals.

VeganEvan also spoke at the academy, presenting on effective forms of nonviolent activism. He discussed the main types of activism he and his mother participate in, stressing that anyone can do activism, and anyone can inspire others to be activists. He also reminded his fellow classmates that the amount of actions one can do as an activist are endless.

“If I talked about every form of activism we’d be here all night,” Evan joked. To conclude his presentation he shared his six-minute video on climate change that was accepted into the Ottawa International Film Festival. Creating videos to share with others is one of Evan’s favorite forms of activism.

While Shannon and Evan consider themselves well-versed in vegan activism, Shannon said the academy exceeded their expectations for training students to become even more effective in their efforts.

“It was comprehensive in teaching us things that we didn’t know all the information on,” she said.

Animals that are used for fashion was a topic that Shannon and Evan did not know too much about before the academy. But after hearing from Joshua Katcher they felt they better understood the industry as a whole. From learning how fashion marketers lie to cover cruelty, as well as how much pain the animals involved endure, and other fashion-industry insights, Shannon and Evan can now spread awareness around these issues more effectively.

In addition to his own personal activism, VeganEvan  serves as the President of Animal Hero Kids, an all-volunteer, nonprofit that reaches millions each year with a message of being kind to all kinds. He believes that kids are the future and is honored to hold this position that allows him to inspire other young children. VeganEvan is also a spokesperson for the Solutionary Species Movement and Walking Justice.

Animals are the driving force behind all that Evan and Shannon do. And with more and more young people getting active for causes such as animal rights and climate change, Evan continues to inspire others.

VeganEvan is paving the way for children to get involved at any age.

Visit VeganEvan’s site to see what he’s up to.