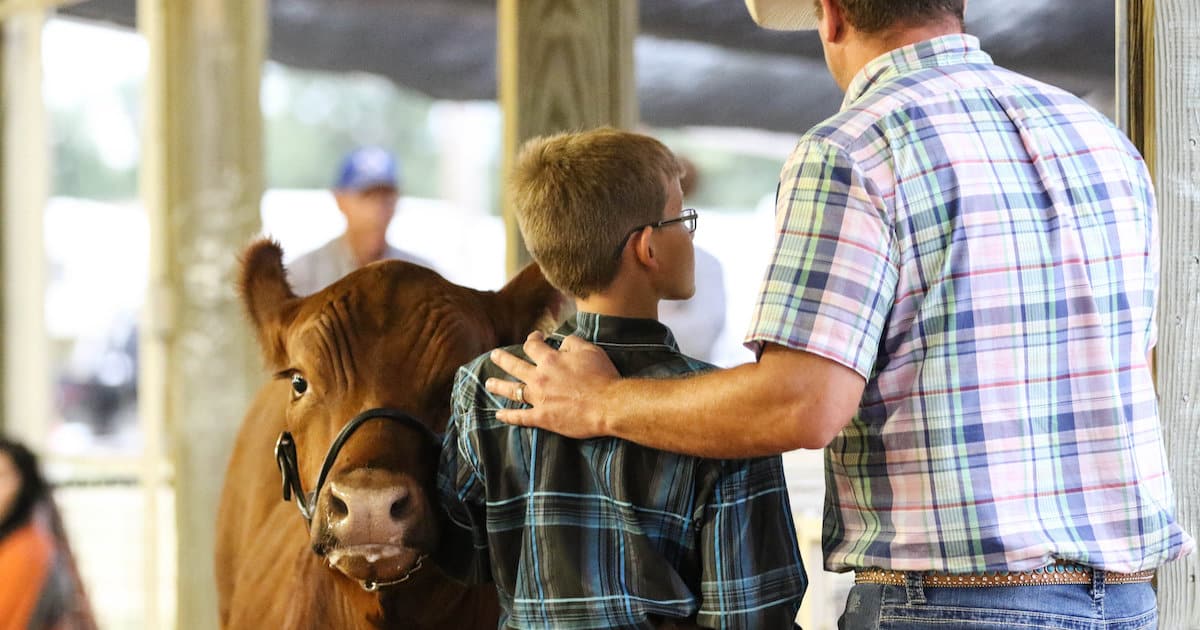 So many of us have seen them, those heart-wrenching photos posted to social media, showing kids bawling while standing next to a lamb or a cow or a goat. The animal has a ribbon pinned to them or a number spray-painted on their back. They’re standing in the middle of an auction ring, and the caption, written by the parent, describes how proud they are of their child, a participant in 4-H or Future Farmers of America (FFA), who has dutifully raised their animal for a year and now must sell them off to the highest bidder.

The auction is a difficult and bittersweet moment for the child, which the parents often acknowledge, but more importantly, it is a valuable life lesson (and there may be some money to win). The lesson is that the early death awaiting the animal is all but inevitable. They were raised to be slaughtered. This is just part of life. There is no other option.

But what happens when there is?

4-H, which stands for “head, heart, hands, and health,” is a non-profit youth development organization with chapters around the world. Raising farmed animals to be shown, auctioned, bred, and slaughtered is just one “project” that participants in 4-H, and similar programs like FFA, engage in, along with other agricultural-focused activities. In the U.S., where 4-H has approximately 6 million participants annually, the organization is administered by the United States Department of Agriculture (USDA). In Canada, 4-H is funded by the federal government and sponsored by various businesses including Cargill, Farm Creditors Canada, and United Farmers of Alberta.

A 2010 study published in the journal Animals and Society, entitled “Reproducing Dominion: Emotional Apprenticeship in the 4-H Youth Livestock Program,” paints 4-H as “an apprenticeship in which children learn to do cognitive emotion work, use distancing mechanisms, and create a ‘redemption’ narrative to cope with contradictory ethical and emotional experiences.” The study shows that participants in 4-H “learn not to name their animals and to think of them as existing for ‘the market,’” and that “the death of an animal is justified if it supports a ‘good cause,’ such as a college education.”

“These animal ag education systems are the precursor to kids becoming farmers and ranchers,” explains Renee King-Sonnen, a former cattle rancher turned sanctuary founder. She says many of the families participating in these programs, who are part of animal farming culture, “are living in a construct, or a belief system, a reality they hold dear, that they feel is righteous because it’s been handed down for generations.” To step out of that belief system, she says, to see animals, their sentience, and their fate differently, is difficult. But it’s happening more and more.

Today, King-Sonnen runs Rowdy Girl Sanctuary in Waelder, Texas, where she cares for dozens of farmed animals including several surrendered from 4-H and FFA participants. She says she gets more requests every year to take in these animals thanks to growing awareness of the sanctuary’s Families Choosing Compassion program. The program allows 4-H and FFA participants to surrender their animals and continue a relationship with them for the rest of the animal’s natural life. She says so far nearly every family that has taken advantage of the program–which also includes promising to no longer participate in animal rearing projects–has left everyone profoundly changed.

King-Sonnen isn’t the only one taking in these animals. Sanctuaries all across North America are receiving requests from participants of youth agricultural organizations who are seeking refuge for their “project” animals.

At Piece of Heaven Project Sanctuary in British Columbia, Canada, Mark Starmer cares for two sheep who were surrendered by a brother and sister who participated in 4-H. Starmer says he was told by the parents that “as the time for showing [the first lamb] drew closer, the girl began to get more and more upset at the prospect of the inevitable outcome. When it came to the black day, she locked herself in her room and refused to attend unless the parents promised that the lamb would not be slaughtered.” The parents then posted on social media asking if anyone would take the lamb in as a pet, and Starmer offered his care. While the sister was too upset to accompany her lamb on surrender day, the brother went along.

“He boasted to me about how he would be participating in a 4-H project next year,” says Starmer. “I joked with him that maybe I would be coming to collect his lamb then. The boy laughed it off,” he recalls. “Of course, one year later my humorous prophecy came to pass.” The brother sent his lamb to Starmer, too.

4-H Canada, 4-H USA, and FFA were all contacted to find out if there are any specific policies or protocols in place for participants who decide they want to surrender rather than show and auction off their animals. None of the organizations responded. King-Sonnen says each local chapter has its own rules, and that some blatantly disallow animal surrender. In a story posted on the Mercy for Animals website, Farm Sanctuary president Gene Bauer states “agricultural programs make auctioning off the animals seem like a student’s only choice.”

But King-Sonnen wants 4-H and FFA families to know there is another choice, a choice that does not perpetuate archaic agricultural norms that demand children deny their emotions and animals be sent to an early death. Rather, there is a choice of compassion, to surrender not slaughter, to see their sentience and not only their worth.