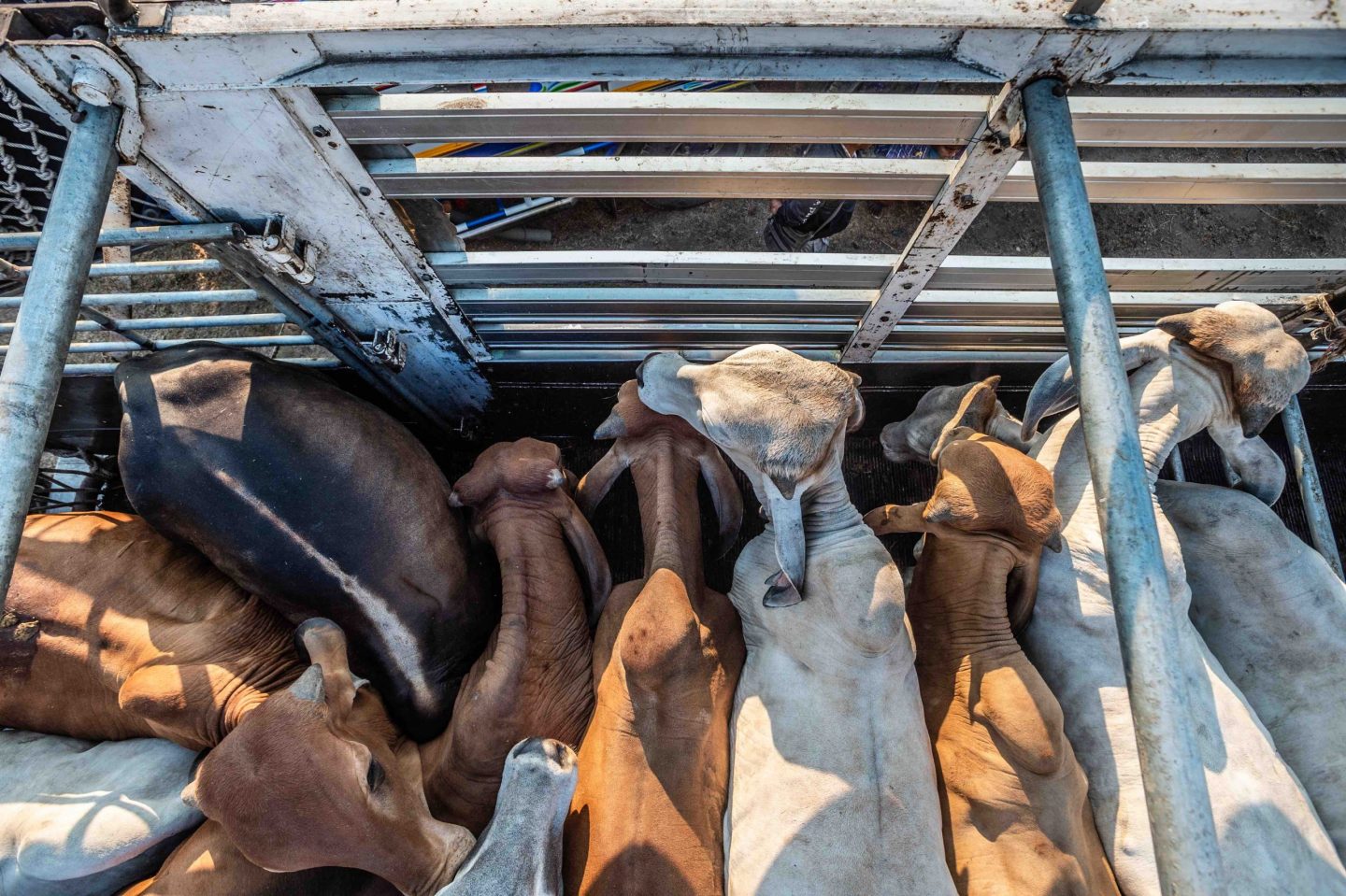 Dairy-Free Starbucks: A Win for Animals and the Planet

In India, leather is produced by adult cows who are forced to march for hundreds of miles without food or water. The cows travel on dusty roads to West Bengal and Kerala—the two states in India where the slaughter of cows is legal—en route to leather processing facilities. Those who become too weak to walk are forced to continue by having their tails broken or their eyes rubbed with chili peppers or tobacco. Upon arrival, their legs are bound and their throats are slit while they’re still conscious. Adult cows used for leather are subjected to many of the same horrors of food-producing factory farms: physical abuse such as branding, exertion to the point of exhaustion, and deprivation of food and water.

The global leather trade is not simply a byproduct of the meat and dairy industries, as some might think. According to a 2009 Greenpeace report, Slaughtering the Amazon, leather constitutes more than a quarter of the value of the Brazilian cattle trade, making it singularly the most valuable part of the cattle industry. As an inedible product, leather is not subject to food safety testing and does not require refrigeration, making it the most profitable part of a cow. The number of cows slaughtered annually to satisfy the demand for leather is predicted to increase from 290 million currently to an estimated 430 million by 2025.  Rather than a harmless byproduct of animal agriculture, leather is a brutal industry all its own.

While global leather production is usually outsourced to India, Bangladesh, or China, cows in the U.S. killed for their skins are treated with similar cruelty. American cows are transported hundreds of miles in extremely cramped cars to leather-processing slaughterhouses. Once they reach the processing sites, adult cows are typically shot in the head with a bolt gun and hung up by their legs. Their throats are cut and they are skinned. Because many slaughterhouses in the U.S. rapidly process up to 400 animals per hour, the cows are often only partially stunned and therefore skinned alive. The steadily rising global appetite for leather ensures that these torturous practices continue.

Adult cows are not the only victims of the leather industry. As with industrial food farming, the skins of the youngest and most vulnerable animals yield the highest economic value. Newborn calf skin produces particularly soft, thin leather, and is thus marketed as more luxurious than that of older cows. To access cows’ skin at its absolute youngest, unborn calves are sometimes removed directly from their mothers’ wombs. Like the meat and dairy industries, leather production frequently relies on the systematic abuse of mothers and their babies, and the severing of the bonds between them.

Consumers insatiably desire animal skin products due in part to the belief that leather is a high-end commodity—a perception that is at odds with the reality of its production. While “exotic” skins such as those from alligators and crocodiles are often marketed by luxury brands like Hermès and Prada, they too are typically mass-produced in extremely dirty factory farms. One Georgia farmer in 2001 had 10,000 alligators living in four buildings, where, according to the Los Angeles Times, “[h]undreds and hundreds of alligators fill[ed] every inch of [each] room.” The process of obtaining animals’ skins is no less barbaric for reptiles than it is for cows. For lizards and snakes, skinning alive is the preferred method because it is believed to keep the skin supple. Snake and alligator skins might seem like luxurious materials for boots and bags, yet producing these skins causes unimaginable suffering and routinely occurs in unhygienic factory farms.

It is virtually impossible to discern which kind of animal produced the skin from which your leather bag or couch is made. People for the Ethical Treatment of Animals (PETA), via undercover footage that it acquired, reveals that dogs and cats are raised for fur and leather in China. The video footage shows dogs being bludgeoned before having their throats cut and their skins removed, sometimes while still alive and conscious. As of 2014, 100-200 dogs were killed in China per day for leather production. The video confirms that the resulting leather was intended for export to the U.S. market. The Dog and Cat Protection Act of 2000 bans the U.S. import of dog and cat furs and skins, but distinguishing dog and cat leather from that of cows, sheep, or pigs is virtually impossible; the ban is therefore extremely difficult to enforce. A report by the Congressional Research Service shows that, in 2014, the U.S. imported $8.5 billion in leather articles from China. The American appetite for leather, unbeknownst to most consumers, directly supports the brutal slaughter of cats and dogs. For animal lovers, or even animal likers, it’s time to rethink leather.

Leather production is not only cruel to animals but also harmful to tannery workers. The tanning process, which treats collagen and protein fibers in animal skins to prevent biodegradation, is what gives leather its durability. Tanning leather so that it does not rot is a multi-step process that requires a noxious cocktail of carcinogens, including mineral salts, formaldehyde, coal-tar derivatives, and various oils, dyes, and cyanide-based finishes. Studies of leather-tannery workers worldwide reveal links between tannery work and multiple cancers, including bladder, pancreatic, skin, and lung cancers. Regular exposure to the commonly-used tanning chemical arsenic is particularly associated with lung cancer. Aniline dye, often used in the tanning process and frequently promoted as a nontoxic chemical, is specifically linked to bladder cancer. In one tannery in Dhaka, Bangladesh, employees have been documented loading chemicals such as chromium and sodium formate into drums of animal skin without gloves or other protective equipment. Chromium dust, which is produced when animal skins are buffed, is considered hazardous by the Environmental Protection Agency—inhaled chromium dust severely harms the upper respiratory tract by acting as a lung irritant and carcinogen, obstructing airways, and increasing risks of lung, nasal, and sinus cancers. Leather manufacturers greatly profit from the tannery process, despite ample proof that tannery work makes employees sick and shortens their lives.

The many noxious chemicals required for leather production inevitably seep into the surrounding air and water. PETA reports that tanning facilities, for every ton of hide processed, typically use 15,000 gallons of water while producing up to 2,200 pounds of “solid waste” (e.g., hair, flesh, and trimmings). Tanneries’ waste runoff causes a serious ecological problem called eutrophication, in which plant life begins growing excessively in water systems, resulting in the depletion of the waters’ oxygen levels. Eutrophication not only suffocates animals but is also the leading cause of hypoxic “dead zones.” By depriving oxygen to aquatic animals and causing them to die dead zones cause ripple effects of harm to marine ecosystems. Animal farming itself requires massive quantities of water and vast areas of land and significantly contributes to global deforestation. In the last half-century, 70 percent of the Amazon rainforest has been cleared just for cattle pastures. Industrial animal farming releases dangerous levels of methane and nitrous oxide, both potent greenhouse gasses. Leather production is thus not only natural resource-intensive, but also extremely harmful to the environment.

Leather production poses a triple threat—it inflicts cruelty on animals, harms and kills humans, and destroys vital ecosystems. Leather is not merely a byproduct of animal farming, but rather directly contributes to the profitability of factory farms and slaughterhouses. Wearing leather condones the continued exploitation of the most vulnerable human and nonhuman animals on the planet. Nothing cool or rugged about that.