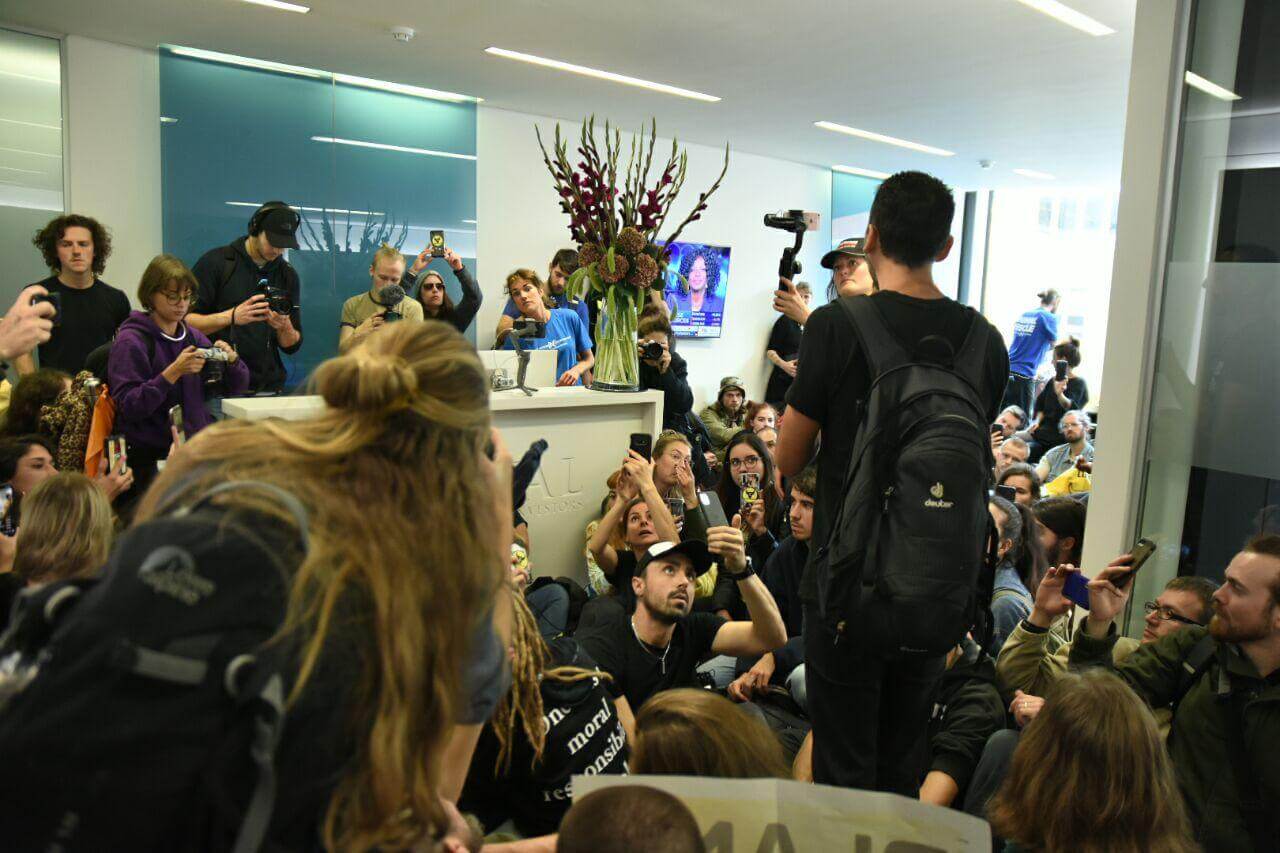 Today, activists from climate and animal justice group Animal Rebellion attempted to get inside the offices of Cargill-backed investment group CarVal on Great Pulteney Street in London, gluing themselves to the doors to bring attention to the company’s role in the climate emergency.

The Cargill action is part of a two-week rebellion led by Extinction Rebellion to put pressure on the UK government to act on the climate emergency. The meat industry giant is widely considered the “worst company in the world” for its link to widespread deforestation, water pollution, food contamination, child labor violations, and animal abuse. Cargill could not be reached for comment.

Last month, the company sold its economic interest in CarVal, which currently has about $10 billion under management, to a group of 17 CarVal employees, who until then fell under Cargill’s umbrella.

CarVal was founded in 1987 by Cargill. The company will remain a significant investor in several of CarVal’s 23 funds and maintain its investments following the sale, Reuters reports, making the investment group a prime target for Animal Rebellion.

The action at CarVal was part of a Global Day of Action organized by the Animal Save Movement, which targeted Cargill slaughterhouses, offices, and its lobbyists in governments around the world.

Inspired by the success of Extinction Rebellion, Animal Rebellion is occupying some of London’s most historic sites to prove that animal agriculture belongs at the center of calls to counter the climate crisis.

Since August, Animal Rebels have stood alongside protesters from Extinction Rebellion, mobilizing tens of thousands of concerned citizens to drop what they are doing and address the most pressing issues of our time: the climate and animal emergencies.

Now, the Rebellion believes targeting sites of animal exploitation and meat production is an urgent next step.

The Rebellion practices open organizing philosophy, sharing the details of their planned protests with anyone who wants them, so they expected a strong police presence at CarVal. The planned action did its job, drawing attention to Cargill and the role the multi-billion-dollar animal producer has played in adding to and profiting from the climate crisis over the past 150 years.

Cargill is one of the largest meat processors on the planet. The company employs 166,000 people and runs over a thousand animal feed and slaughter facilities across 59 countries. In the U.S., Cargill is responsible for killing more than 62,000 cows every day.

Central to Animal Rebellion’s demands is the initial premise that at its core, animal agriculture is destroying the planet. Government and companies such as CarVal and Cargill must wake up to the fact that that the world is already in a state of climate and ecological emergency wreaking havoc and afflicting millions.

Without urgent and collective action, the conditions on which human civilization and other life on Earth depend will be lost.

Earlier this week, Animal Rebellion successfully occupied Smithfield Meat Market on Monday to set up the “Plant-Based Market for 2025,” full of fruit, vegetables, and vendors carrying plant-based alternatives that will be the basis of future food systems.

Yesterday, a group of Animal Rebellion activists locked themselves to the Department for Environment, Food and Rural Affairs headquarters in central Westminster, calling for the end of animal agriculture and fishing industries and a transition to a plant-based food system.

More protests are planned over the coming days.

Tune in to our Instagram feed for more updates from the Rebellion.