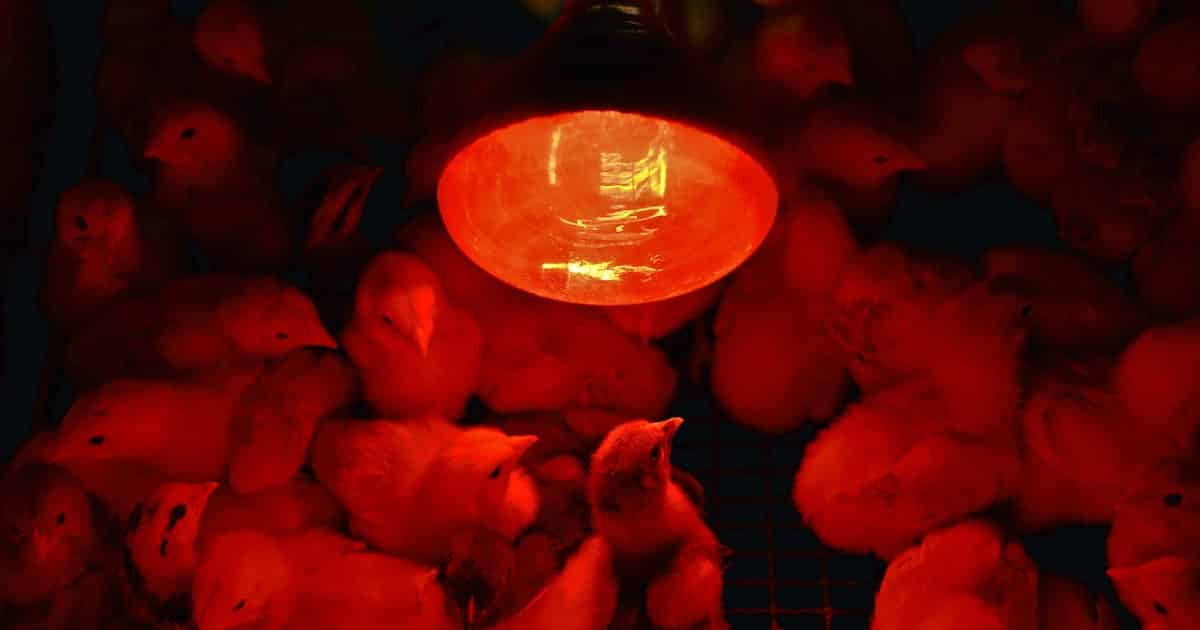 Connecting the Dots Between Climate Change and Animal Agriculture

Chicken nuggets are a staple of fast food chains and grocery store freezers, known as both convenient and versatile, accompanied by an array of popular dipping sauces. They rank most popular among frozen chicken products, and over 73 million Americans regularly consumed them in 2020. With their boneless, bite-sized shapes, it’s easy to forget that these products come from a living chicken—one who most likely lived his entire short life in a windowless, ammonia-filled shed, packed wing-to-wing with other chickens.

So, how are chicken nuggets made, and where are they produced? The production of chicken nuggets is thriving in the United States. People purchase more chicken than any other type of meat, and chicken consumption has been steadily increasing since the 1960s. In 2020, chicken was the number one protein consumed in the U.S., at a whopping 98 pounds per capita—nearly triple the per capita consumption of the 1960s. But what many people don’t know, as they pull up to a fast food drive-through after a long day at work, is how the invention of chicken nuggets led to the emergence of this colossal industry.

During World War II, U.S. civilians faced a shortage of red meat, the preferred dietary protein at the time, and people turned to chicken as a replacement. Farmers and businesses stepped in to meet the increased demand, modernizing the industry to grow chickens faster and more cheaply. Yet the end of the war brought a sudden decrease in chicken consumption. Research was undertaken in attempts to revitalize the industry, and in 1963 Robert C. Baker invented chicken nuggets in a Cornell University laboratory. He then sent the recipe to companies and nuggets became an instant success, eventually becoming ubiquitous on fast food menus nationwide.

The industry gained another boost in the late 1970s when U.S. dietary guidelines raised concerns about red meat consumption and encouraged people to eat more chicken. When McDonald’s introduced its branded chicken nuggets in the early 1980s, the product sold better than any other item on its menu. The U.S. demand for chicken was solidified with the successful marketing of the nugget, and farmers sought to increase their profits by breeding chickens selectively for rapid weight gain and growth.

The invention of the chicken nugget helped launch an industry that slaughters 25 million chickens per day in the U.S., but what’s really in this breadcrumb-coated fast food staple?

The chicken nugget contains very little actual meat. Rather, nuggets are mostly fat and other assorted body parts, including nerves, bone, skin, and connective tissue. According to an analysis performed by researchers at the University of Mississippi Medical Center, fast food nuggets from two restaurants contained nearly 60 percent fat and only 18–19 percent protein. In addition to large quantities of fat, the researchers detected microscopic bone shards and connective tissue, like tendons and ligaments, leading them to raise concerns about the health ramifications of this product, which is frequently marketed to, and considered a favorite meal of, children.

They are high in sodium, and a six-piece serving of chicken nuggets can contain anywhere from 270 to a hefty 500 milligrams of sodium, depending on the restaurant. A 10-piece box of nuggets from McDonald’s will contain nearly half of an adult’s daily sodium requirements. Eating more than the recommended amount of sodium can lead to health problems like high blood pressure, as well as increasing the risk of stroke, heart disease, and cancer. And to prepare them, nuggets are often fried in oil, which has been shown to have a strong connection to chronic diseases such as Type 2 diabetes, high blood pressure, obesity, and heart failure.

Given the poor nutritional content and unhealthy ingredients of chicken nuggets, nutritionists and doctors have understandably sounded the alarm about the possible long-term health effects of a diet dominated by foods like chicken nuggets. In addition to an enhanced risk of chronic disease, these effects include headaches, depression, dental disease, high cholesterol, and acne.

Animal suffering can also be added to the list of the nugget’s negative consequences. Chickens whose bodies are used to make nuggets experience short, painful lives in crowded factory farms. While the shape, size, and convenience of chicken nuggets may make it easy to disconnect from this fact, nuggets nevertheless come from once-living chickens who valued their lives in much the same way people do.

How Are Chicken Nuggets Made?

Chickens raised for meat products like chicken nuggets are called “broilers” or “broiler chickens.” These chickens have been bred to grow very fast and gain weight quickly. Their rapid growth causes painful bone defects, inability to move around, foot lesions, and sudden death. They are slaughtered at only five to seven weeks old. But how do chickens go from living birds to the unrecognizable nugget on someone’s plate?

Broiler Chickens Are Born in a Hatchery

Eggs from the breeding birds are removed and placed in incubators. Once they hatch, the chicks are kept together in a large barn for up to 72 hours.

Chicks Are Moved to an Intensive Indoor Housing System

The chicks travel along a conveyor belt to be dropped into transport boxes. They are moved to large sheds with artificial lighting (most have no windows or access to the outdoors) on a “grow-out farm.” A typical shed has tens of thousands of chickens crowded inside. Sheds are generally barren and one-level, equipped only with drinking lines and feeders, and perhaps some litter on the ground. Often the sheds are not cleaned, nor is fresh litter provided for the birds. Here, they live the rest of their short lives.

Chickens Are Transported to Slaughter

Workers catch chickens by their legs and put them into transport crates, and they often suffer painful injuries like broken bones in the process. The crates, packed so full that the chickens can barely move, are loaded onto trucks. Chickens then endure hours of transport with no food or water and are subjected to extremes of heat and cold before reaching the slaughterhouse. Many birds will die from injuries, exposure, and stress before even arriving for slaughter.

Chickens Are Stunned and Killed

At the slaughterhouse, chickens are hung upside down in shackles and then passed through an electrified water bath to immobilize them, a process that frequently leaves chickens fully conscious.

The chickens then pass through a mechanical rotating blade that is intended to cut their throats; however, this process often misses the arteries in the neck that ensure rapid death from blood loss. Research shows that hundreds of millions of chickens may pass through this stage of slaughter fully awake and experience intense fear and suffering.

Chickens Are Eviscerated and Dismembered

Next, chickens are dumped into vats of boiling water to loosen their feathers, and put through a machine called a “picker,” where hundreds of rubber “fingers” remove the feathers. Chickens who did not bleed out during the previous stage face excruciating pain as they are scalded alive.

After the “picker,” the birds move to a mechanized eviscerating line, where their internal organs and feet are removed.

Carcasses Are Rinsed and Chilled

The bodies of the chickens are rinsed with substances, which may include chlorine, to disinfect them and reduce bacterial growth.

Chicken carcasses destined to become products like nuggets undergo additional processing. They are cut up (often on a mechanized assembly line that can be programmed to perform certain cuts), deboned, and mechanically separated. The meat is ground, then forced under high pressure through screens that reduce the meat, bones, and other parts into a paste. This paste is mixed with chicken skin and additives, including starch and sodium phosphate, and then shaped into nuggets. The newly formed nuggets are breaded, partially fried, and prepared for shipping.

What Is Bad About Chicken Nuggets?

Although the chicken nugget, with its cheerful packaging and tasty sauces, may appear innocuous, it drives an industry that’s exacting high costs in terms of environmental degradation, animal suffering, and human health.

Runoff from farms pollutes rivers, lakes, and ponds, causing harmful algae blooms, and killing fish and other aquatic animals. Contamination of water sources by heavy metals and pathogenic bacteria in chicken manure can cause disease and death in wildlife. Land degradation can also easily occur when soil is overfertilized with runoff and becomes fouled with waste byproducts.

People who live near intensive chicken farms experience illness from water and air pollution. Poultry production releases significant amounts of ammonia, methane, and sulfur dioxide, and causes elevated levels of particulate matter, volatile organic compounds, and nitrogenous compounds. Airborne ammonia can cause eye and lung irritation in both residents and workers, and other airborne compounds can lead to bronchitis, asthma, heart disease, and lung cancer.

Nearby residents suffer from strong odors and increased populations of insects that spread disease, like flies and mosquitoes. Research conducted by the Ohio Department of Health found that people living near large chicken farms dealt with 83 times as many flies and mosquitoes as those living in other areas. People living near chicken farms also experience economic losses due to decreased property values and may not be able to afford to move to places with clean water and air.

Chickens raised for food products like nuggets suffer their entire lives. These sentient, intelligent birds are deprived of every natural and normal behavior from their birth to their death. Hens, who are caring and attentive mothers, are artificially inseminated. Their eggs are removed, and they are never given the opportunity to raise their chicks. Breeding birds are routinely starved to prevent the rapid weight gain in broilers that leads to early death.

Chicks are held in overcrowded, dark sheds with no natural light or access to the outdoors. Often, they don’t even have enough room to spread their wings. High ammonia levels in the sheds cause eye ulcers, burns, and skin inflammation. Wet, dirty litter leads to painful contact dermatitis and infections.

Birds raised in “free-range” conditions don’t have it much better, where access to outdoors usually means a few small openings into a barren, fenced yard. Because so many chickens are crammed together in a shed, only a few can actually access these spaces.

Broiler chickens’ unnatural growth leads to further suffering—their legs are unable to support their body weight, leading to collapse. Some will slowly starve or dehydrate as they lie in their own feces. With inadequate ventilation in the sheds, some also expire from heat stress. Millions die before even reaching the slaughterhouse, and the ones who survive face the agony of being electrocuted and having their throats slit, often while fully conscious.

The demand for quick and easy products like chicken nuggets has driven an industry that exacts a heavy toll on the environment and human health. It has created a system based on the suffering and death of billions of smart, sentient birds. And it’s unsustainable.

Consumers can help by choosing to forego nuggets and other products made from animals. Routinely selecting plant-based foods is one of the best ways to decrease the number of animals slaughtered. There are many plant-based options for chicken nuggets, which means people can get their nugget fix without harming animals or contributing to environmental degradation. Companies like NUGGS, MorningStar, Gardein, Alpha Foods, and BOCA, to name just a few, all have tasty selections available.