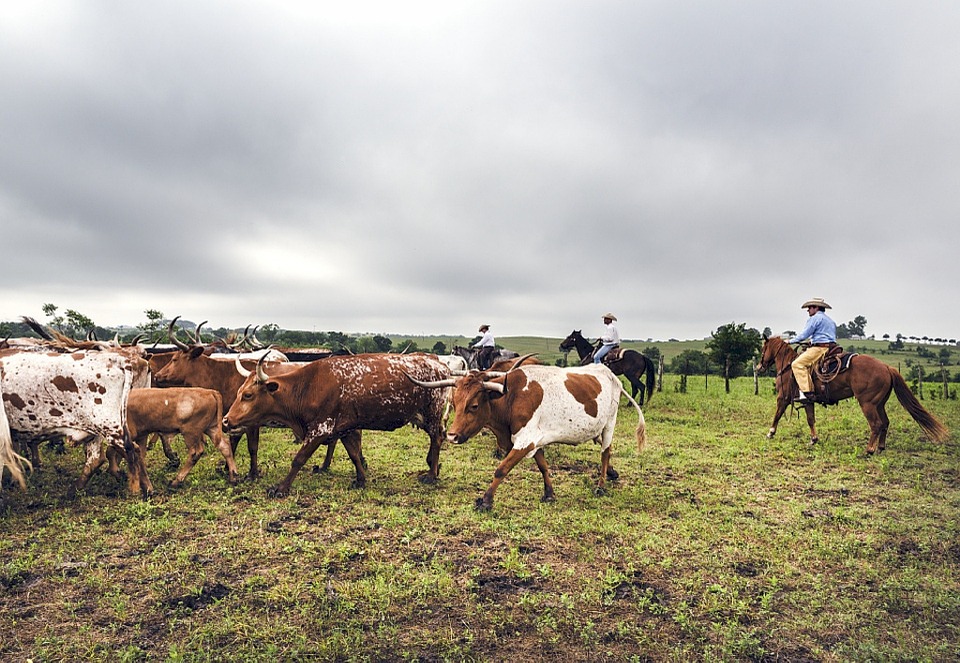 Companies like Beyond Meat are raising huge amounts of money and traction in the mainstream and the consumption of beef is steadily dropping.

A study released by The New York Times shows that beef consumption in the US dropped by 19% between 2005 and 2014 and those numbers continue to show the same pattern.

Let’s break down the points Frazier made and why they prove that the National Cattlemen’s Beef Association is clearly worried about the future of beef.

It doesn’t take a team of research analysts or data scientists to come up with that kind of obvious statement.

“There is no alternative to beef” claims Frazier. In the fiery post released on April 26, Frazier outlines different statistics that show how beef still holds a strong per capita consumption rate compared to plant-based alternatives in the US.

Frazier writes, “regarding consumption, beef’s 2019 annual projection is more than 58 pounds per capita versus beef substitutes measuring just a few ounces per capita.“ What he forgot to mention was that 58 pounds of beef consumption per capita is down from 60.8 pounds in 2009 and 67.3 pounds back in 1999 according to data from the USDA.

And while it’s true that more people are consuming more beef than plant-based alternatives, it’s easy to show per-capita data that favors something consumed by 95% of the population against a vegan/vegetarian population that barely makes up 5% of the adult population.

By using this kind of logic, this would be like boasting that more people celebrate Christmas than Chanukah.

Frazier then discusses consumer attitudes and claims that when it comes to “meat alternatives, research has found that consumers consider beef one of the very best sources of protein, and plant-based and lab-grown alternatives are considered some of the worst.” What he failed to do was disclose the source of said research. It’s convenient to adhere to a specific narrative by not showing the sources for data.

Frazier sites three different “Checkoff-funded ads” that are being run to “ demonstrate the care that farmers and ranchers take in producing beef.”

First, what is a Checkoff-funded ad?

According to the Cattlemen’s Beef Board itself, “the Beef Checkoff Program is a producer-funded marketing and research program designed to increase domestic and/or international demand for beef. This can be done through promotion, research and new product development, and a variety of other marketing tools.”

All farmers in the dairy, veal, and beef industry in the US pay the Checkoff Program one dollar per cow. According to the Cattlemen’s Beef Board, “the checkoff assesses $1 per head on the sale of live domestic and imported cattle, in addition to a comparable assessment on imported beef and beef products.” This generates tens of millions of dollars per year and helps funds campaigns like Beef. It’s What’s for Dinner.

Again, it’s a marketing and research program designed to increase demand for beef that is run and organized by the Beef Industry.

In the ads starring in Frazier’s post and promoted by the Cattlemen’s Beef Board, the videos mock people drinking shakes, eating protein bars, and eating plant-based substitutes. One of the links goes to a wildly popular Facebook post with a whopping four likes and one share: 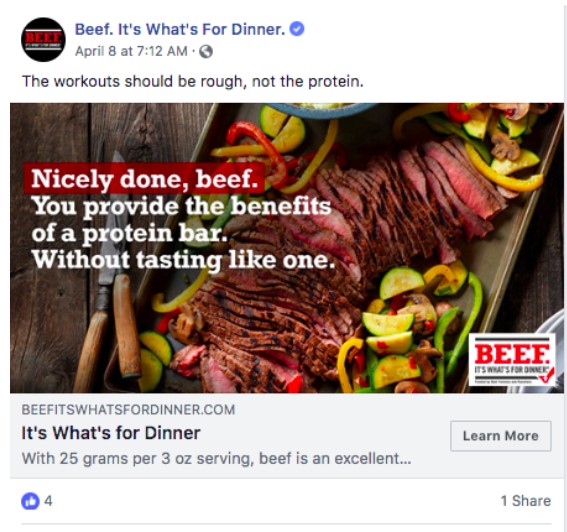 In the first ad, they try to make fun of people that consume shakes for protein. However, they fail to deliver the message as the man making the shake (and being shamed for not eating beef) is much larger and stronger than the guy eating the steak. Apparently, beef isn’t what makes you strong according to the marketing team behind the Cattlemen’s Beef Board. 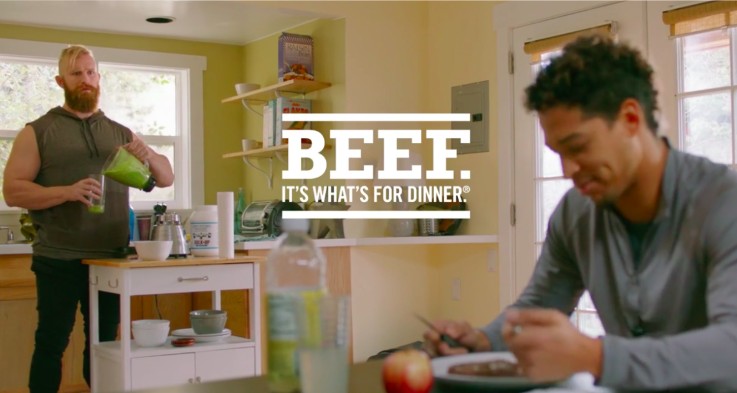 And if the failed attempts at “real men eat beef” stereotypes above weren’t enough, Frazier continues in his post to talk about how the NCBA will leverage the popularity of NBC’s American Ninja Warrior to push the false idea that one needs beef in order to be strong.

The NCBA, “through the beef Checkoff” fund, partnered up with Lance Pekus, AKA the Cowboy Ninja. Can’t get more manly and patriotic than a “cowboy” and a “ninja.”

The NCBA is paying Pekus to appear in videos to promote the idea that his success and health is the result of his beef consumption. Interesting that it wasn’t the years of hard training and work ethic that brought him to where he is as a “Cowboy Ninja.”

According to Frazier, these videos have already amassed 19 million views. And because the beef industry has been pushing the idea that beef is what people need for protein and strength for so long, this kind of dishonest propaganda only further perpetuates the dangerous myth that people can only get their protein from animals.

Frazier mentions in the following section that “retail and foodservice companies get the facts about beef.”

His argument is already misguided from the title of this section. What facts about beef is he talking about? The entire piece is talking about how “not scared” the NCBA is about the growth of plant-based substitutes and how beef is the only real protein people need to be strong and healthy. So what exactly does he mean by how they “get the facts about beef” in the title?

Based upon his description, the only reason these companies care at all about beef is that it brings more money to their bottom line.

According to another study that Frazier failed to reference, “when beef is part of a consumer’s grocery basket, retailers enjoy a considerable increase in the total basket’s value. In fact, carts with beef generate 44% more sales across the store than carts with chicken. Beef substitutes fare even worse.”

Is that the “fact” about beef these companies get? It makes them more money?

If that’s the case, that must be the same reason so many retailers and foodservice companies are stocking their shelves with plant-based substitutes like Beyond Meat and Impossible Burgers. Probably why companies like Burger King, Carl’s Jr, Del Taco, and countless other companies are now offering plant-based meats at their locations as well. More demand equals more sales equals more profits.

This is why the NCBA isn’t “resting on its laurels.”

Frazier and the members of the NCBA are so worried, in fact, that they are pushing the USDA and the FDA to insist plant-based companies and alternatives can’t use words that make people think of their own products.

They are working “together to enforce existing labeling laws for plant-based protein products so that beef’s nomenclature is protected.”

An article from February of 2019 in The New York Times talks about how “cattle ranchers and farm bureaus of America are not going to give up their hold on the word meat without a fight.”

The same thing has happened in Europe.

“In a move that some MEPs (Members of European Parliament) suspect bears the fingerprints of the meat industry, the parliament’s agriculture committee this week approved a ban on producers of vegetarian food using nomenclature usually deployed to describe meat.”

Fighting Against “False Facts” – With Biased, Industry-Paid Science and Studies

In the most shocking part of Frazier’s post, he discusses that “plant-based and cell-cultured meat advocates have been using false claims about beef, particularly when it comes to the impact of beef production on climate change.”

According to the World Resources Institute, “both the environment and the climate will benefit if people adopt a lower-calorie diet low in meat consumption, especially beef.”

In fact, the resources needed to produce beef has a more dire impact on the environment and climate change than any other food industry. 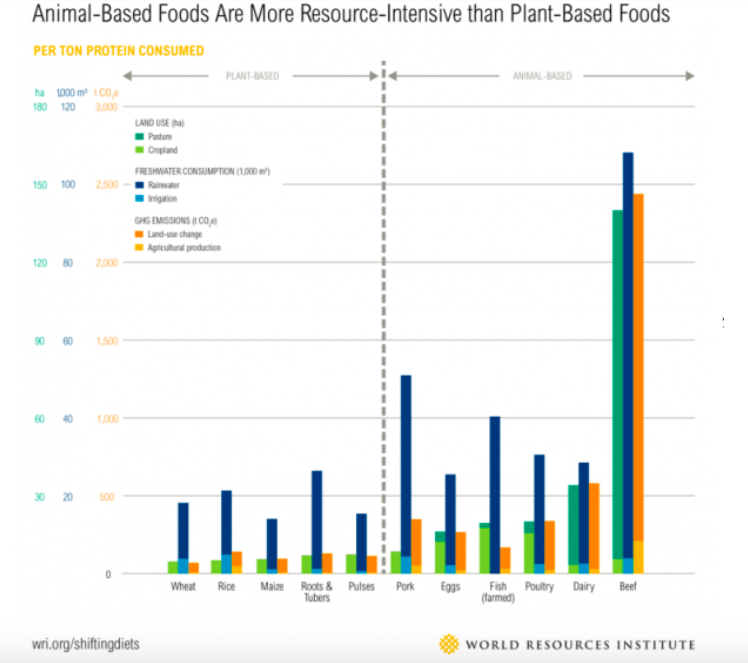 But Frazier doesn’t believe this and neither do the folks at the NCBA.

“Checkoff-funded research is providing the information we need to demonstrate the falsehood in their claims” according to Frazier.

Does Frazier think that hiring a Cowboy Ninja to tell people about their biased research studies is going to sway public opinion about the beef industry’s role in accelerating climate change?

In conclusion, Frazier mentions that plant-based alternatives are growing and that NCBA doesn’t like it.

He talks about how they will continue to address the situation very aggressively because any company or organization that doesn’t feel threatened by a new industry will react aggressively, right?

Frazier mentions that the NCBA will “use the influence we have in Washington D.C. to ensure a level playing field for beef production and marketing.” Having their lobbyists convince politicians to create laws to call new plant-based alternatives by different names, the same way things are happening in the EU, seems to be the top strategy of an old and threatened industry.

Pretty soon we will see energy companies dependent on fossil fuels forcing solar and wind companies to stop using the word “energy” as to not hurt their image either.

And finally, Frazier mentions that when it comes to nutrition, “we feel that beef offers the most for today’s consumers.”

Beyond being incredibly vague, he claims that’s how they, at NCBA, “feel” about beef.

It’s too bad for their feelings that endless studies show otherwise.

To make all of this even more interesting, Kendal Frazier, the CEO of the National Cattlemen’s Beef Association, announced his retirement three days before releasing this post, 34 years after first becoming involved with the NCBA. That’s one ominous note to depart on.