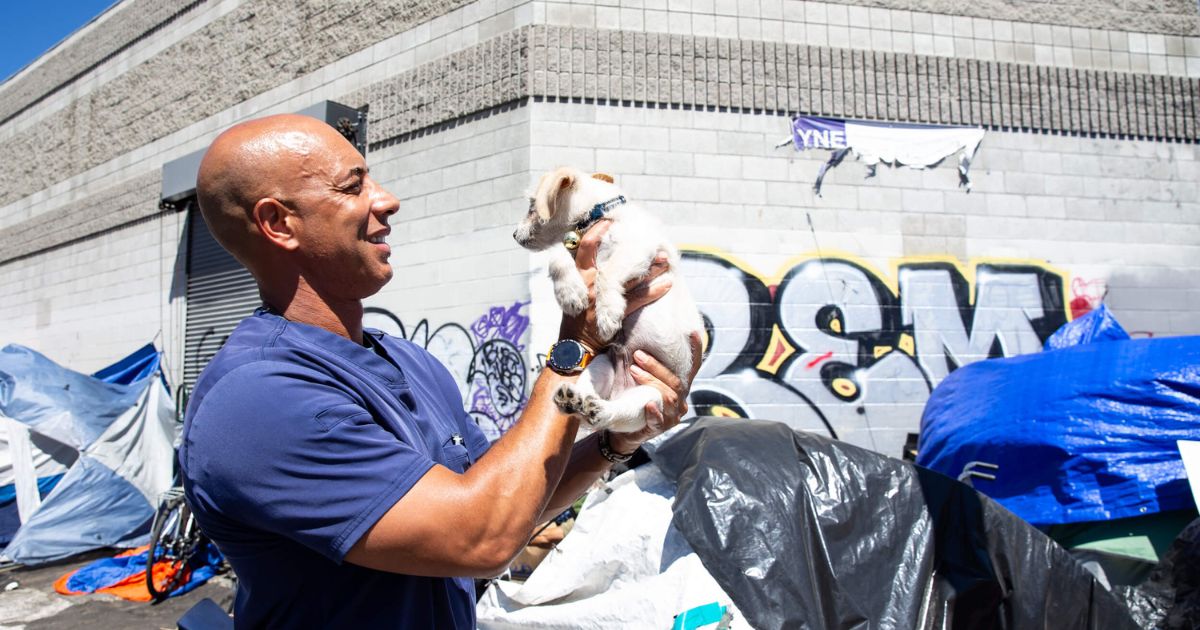 Following his graduation from veterinary school in 1997, Dr. Kwane Stewart has spent the past 25 years of his career serving pets and the people they love in shelters, emergency medicine, non-profit, and, for the last twelve years, on the streets of numerous California cities providing care to companion animals of homeless residents.

Since starting this journey, Dr. Kwane and his team have provided care to hundreds of companion animals living with their owners on the streets, in many cases changing lives as they do. His time spent working with California’s homeless has also had a profound impact on him.

Dr. Kwane Stewart: I was a shelter vet during the recession. This was around 2010. It was a terrible time to be a shelter vet, because animals were getting dumped. There were boxes of kittens being dropped off. People weren’t able to feed their horses and couldn’t give medical care to their dogs. So we had hordes of animals coming into the shelter. Some mornings, we were euthanizing 50 animals by 10am. It was killing my soul. I didn’t get into the profession to destroy animals but to save them. I thought about quitting the profession altogether, around this time period.

One random day, I remember going in to get coffee at my usual 7-11. I noticed a homeless man sitting outside. Normally I would just ignore him, but that day, I noticed he had a dog. I could see the dog had a really bad skin condition. And to me, it looked immediately like a chronic flea issue. When you do this long enough, you can almost diagnose some conditions from across the street. I stopped, introduced myself, and talked to him. He said the issue had been going on for months. The next day I came back with a $3 preventative. After just a few days, the dog was transformed; her hair was coming back, skin was almost completely healed. The homeless man just looked up at me with tears in his eyes and said, ‘thank you for not ignoring me’. That was the kickass moment for this 12 year journey.

Grace: Why is it important that we provide care to the companion animals of homeless people?

Dr. Kwane: I will admit that back before I started doing this work, I was judgmental of our homeless population even owning pets. That’s because when you’re in school you’re sort of indoctrinated by your professors. Specifically that all dogs deserve medical care, and if you can’t provide that you probably shouldn’t own the pet. As I started to do this work I realized that if anybody needs a companion, it is this population of people. They in some cases are entirely dependent on this dog to get them up in the morning, to give them hope, to give them purpose, to keep them pushing. Their pets can inspire them to get off the streets. One lady just recently told me ‘I know everything I do every day is to get a house and get her a yard’. And so this little animal provides them so much. If really all they’re lacking is some resources to give medical care and that’s what I can do and what more of my colleagues can do then I believe they deserve that.

Grace: What would you say to someone who believes that homeless people should rehome their pets?

Dr. Kwane: I would say that, with rare exception, that is just a poor attitude and not true. You need to get to know these people, better understand their situation, see how well they care for their pets, again, with few exceptions. They deserve to stay together. The sacrifices that they are willing to make for their pets are far beyond what you and I would make. I don’t see a lot of my clients with money giving up their last meal to feed their pet, these people will do that. Beyond that, the bond between a person and their pet that is on the streets, where all they have is each other and they spend every minute together, is on a far higher level than the average pet owner.

Grace: Are there unique challenges that homeless people face while caring for their companion animal?

Dr. Kwane: Of course they struggle to get what you would consider ordinary care for themselves: getting three meals a day, a roof over their head, clean clothes, basic hygiene. That’s no secret. Their pet is on the streets with them, so their pet doesn’t have a traditional home. Some people will criticize him for that. I don’t because they’re together all the time. The fact of the matter is this a dog doesn’t really care about material things. They don’t care about a big home, or a nice car, or beautiful furniture; they want to be with their person. If that’s in a tent, or under a tarp, it doesn’t matter. In a lot of ways the person experiencing homelessness is giving their pets much more of what they deserve.

Grace: How are you helping the people by providing care to their companion animals?

Dr. Kwane: In that story I first told you that poor man was losing all hope. People are walking by him ignoring him not wanting to help. The moment we shared probably restored some of that hope in him. More than that, the most important thing in his world, his dog, received care. I’m a veterinarian, so I can’t give medical care to people, but helping the being that is most precious to them means everything to them.

Grace: How did COVID impact your work?

Dr. Kwane: By the time COVID rolled around, I had been doing the work for about ten years. COVID immediately shut society down and scared a lot of people from going about their normal day. For me, I’m out in the streets interfacing very closely with people. For a good six to eight months, I just stopped doing it entirely in 2020. Of course when services shut down, particularly medical services, then the need just skyrocketed. When I decided to start getting back out there again, there was an explosion of pets needing care, but also more homeless which has been on the rise significantly anyway. I’ve been doing this for twelve years and I had never seen such a surge in our homeless population. Estimates suggest that 25% of our homeless own a pet, so that gives you some indication of need. There are a lot of pets on the streets. You don’t always see them, but there’s a lot. So I had more work than ever; it felt a little overwhelming. About the same time, I had more veterinarians, more colleagues reaching out asking if they could do the same thing. That’s when this project has really taken off.

Grace: Throughout your 12 years of doing this, how has the work impacted you?

Dr. Kwane: In so many ways. Our mantra has become no judgment, just help. That’s because I think these people would receive a lot more compassion, sympathy, kindness, if we didn’t judge them. We’re looking through our own prism, our lens. I did the same thing, I’d see a 30 year old able bodied person on a corner shaking a can, and I’d think you could go get a job. What I’ve come to realize is that I was trying to write their story for them. It wasn’t my place to do that. I don’t know his situation. Obviously, there’s a lot of mentally ill on the streets, people struggling with drug or substance abuse issues. There are more women on the streets than people realize, and that happens sometimes because of domestic violence. Then, of course, it’s economic. We’re all struggling a little bit economically. To get a studio apartment in Los Angeles, your application is one of many on top of it being ridiculously expensive. It’s unfair how expensive just basic housing is in California, especially southern California. If you’re someone who’s fallen on hard times, and your credit is blown, you’re just not getting a place, even if you have money. Some of these people have retirement checks coming in, or social security or disability, but because they have poor credit, they can’t get a place. They’re living in their car. These people want to get back on their feet, but they’re held down sometimes by the sad nature of our society.

Grace: How do you see your new role as Chief Veterinary Professional Relations Officer with Fear Free supporting your work with homeless clients?

Dr. Kwane: I think the two work hand in hand. I’ve been doing fear free on the streets. I’m an advocate for the techniques and methods that the fear free philosophy is built on. I’m very patient with my patients. I don’t force procedures on them. I get down on their level recognizing that a dog’s number one fear is falling. Putting them on a table with no grip has been done for generations. So I’ve been using a lot of fear-free techniques even long before the program was well known. I can also talk to my clients about fear free and why I do what I do and they love hearing that I’m not rushing through things. I want their dog to welcome me back when I see them again. It’s a beautiful tandem.

Grace: How can readers best support you and Project Street Vet?

Dr. Kwane: They can always go to our website, ProjectStreetVet.org. Stories, anecdotes, things we plan for the future, and new teams sprouting up around the country, can all be found on the website. If people want to donate or they’re eager to volunteer, that’s the place to go. They can go to Instagram, @thestreetvet. We share cool stories from the streets; it’s pretty inspiring. We love people’s well wishes via Instagram messages. Obviously we run on donations. Everything we do is fueled by the kindness of others. I can make a few dollars go a long way to deworm and vaccinate a pet. That’s really what keeps things afloat.

Dr. Kwane: No one will ever touch you so lightly they won’t leave a trace. In the work that I’ve done, I hope I’ve made a little bit of an impact or imprint. I know speaking for myself these brief moments leave a permanent impression on me that I carry with me every day.

Along with that, I do really believe in today’s day and age, there is a shortage of two things, tolerance and kindness. We just seem to be so intolerant of one another, and what we believe and think. It seems to be more heightened than even when I was a child in the 70s and 80s. For some reason, it seems like we’ve taken a few steps back. I think that because people are so quick to judge one another, they’re less likely to do something kind for someone else, for a stranger. My work is really just based on showing kindness to someone else without an agenda and without pay but just because they’re another human being. You’d be surprised what one small act of kindness will do for somebody. Some gestures of kindness can actually change someone’s life. We believe that we are maybe in some ways changing someone’s life or their trajectory. Perhaps we’re saving them in a moment where they were feeling complete despair. If I can inspire just a few others to do that, then I’ve done my job.