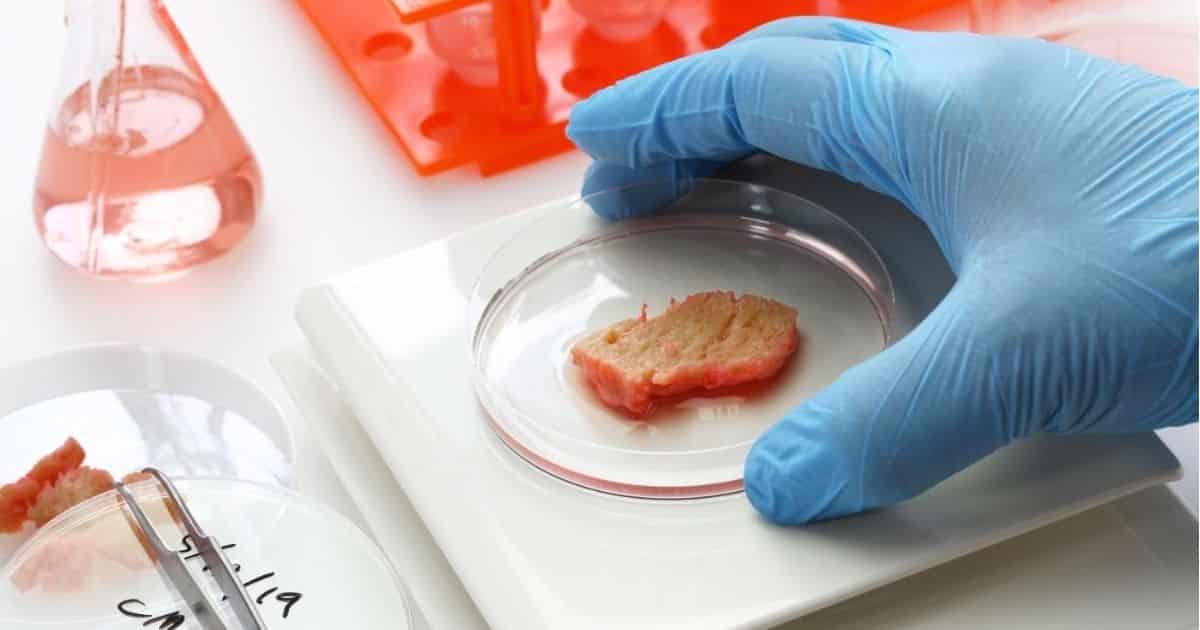 A goop of white, congealed liquid is handed from one person to another. The goop is placed in hot milk and the whole airtight can is put in the fridge. This is how a refrigerator can house starter culture and a growth medium for yogurt. This same principle for making yogurt should now be used for meat, say advocates for cultivated meat. Making meat, however, is a more sophisticated process than making yogurt, cheese, or beer in one’s kitchen or garage. And meeting the global demand for meat is a massive endeavor.

In 2019 Americans ate on average about 185 pounds of conventional meat, a number that has gradually risen since the USDA began tracking meat consumption in the United States in 1909. Though as the line chart below shows, there has been a decline since the 1970s in the consumption of red meat, which includes beef and pork.

The steady increase in the consumption of chicken in the United States since the mid-20th century may help to explain why the world debut of commercial cultivated meat in early 2021 was chicken.

What Is Cultivated Meat?

Cultivated meat is meat that is made by gathering and growing tiny building blocks of life, also known as cells, without killing an animal. It is also known as lab-grown meat or cultured meat, among other names. When cooked, cultivated meat reportedly holds its shape and texture in the same way as hamburger patties or chicken nuggets do. Cultivated chicken, fish, and beef are being developed for the market.

How Is Cultivated Meat Made?

The meat is made by people who are heavily funded by rich and powerful companies like Cargill and Tyson Foods, which currently rely on factory farming. But it is also supported by animal advocacy groups like PETA. Scientists who work for food technology companies are developing the meat in laboratories, with hopes of finding ways to improve and scale up their production.

First, the scientists take cells from the animal of choice. They then put these starter cells in a bath of nutrients and proteins that tell the cells to grow. Finally, food scientists are trying to figure out how to make different and more realistic textures of meat than they are currently able to. If you want to read further, try these fuller descriptions of the science behind how cultivated meat is made.

Being vegan, for most people, means not eating foods or using products that were made by killing or harming animals. Cultivated meat is a new type of meat, but it is still made with animal products. The cells from which it is made are taken from live animals. The cells are grown in fluids taken from animals as well.

Yet many vegan advocates are excited about cultivated meat because it signals a major animal welfare development. It even has the support of agribusiness leaders. The idea behind this enthusiasm for cultivated meat is that no animals would be harmed or killed in the making of it. The hope of realizing the vegan values of not killing or harming animals is strong enough for people to wait and see how cultivated meat plays out before deciding how vegan it is.

Veganism gets more powerful when considering the broader food chain beyond the item on one’s plate: is it vegan to eat chocolate or sugar that came from the hands of enslaved people? For most vegans, it would be impractical to stop eating vegetables, even if they knew that the people who picked them did so under unnecessarily poor conditions imposed by their bosses and society at large. While mainstream veganism does not universally embrace farm workers’ rights, some vegans readily see the connection between the suffering of humans and nonhuman animals.

Neither cultivated nor conventional meat industrialists are explicitly tying their products to collective liberation. Cultivated meat proponents, unlike Black Vegans, do not name white supremacy as the common denominator in the oppressions of animals and people of color. So while hopes remain high that cultivated meat can contribute to the reduced exploitation of animals, labor, and people of color—as a result of reduced demand for slaughterhouse work, for example—the scope of what cultivated meat offers is limited by its being a new type of product in today’s marketplace.

Life as a vegan is a daily, personal exercise in choosing the less harmful path between the options before you, based on what is important to the communities you support. Whether cultivated meat is vegan is a question for each vegan to decide for themselves.

What Are the Benefits of Cultivated Meat?

Cultivated meats increase the variety of slaughter-free proteins available to people who eat meat, or who want to eat meat, from animals that were not tortured. There are not a lot of results available yet, but one purported benefit of cultivated meats is that they will not use antibiotics and could replace unused meat from animals as a source of higher-quality pet food.

What Are the Differences From Conventional Meat?

Both cultivated and conventional meats are real meat. The primary difference between them is that the former is still so new that it remains in development in most of the companies that are producing it, while the latter has a broad base of knowledge attached to it. The following subsections will attempt to contrast cultivated meat with conventional meat, but reports on cultivated meat can involve a great deal of hypothesis and speculation.

The greatest potential impact on health from cultivated meat is that, unlike conventional meat, its production process allows the animals involved to live.

However, there are few reported differences from conventional meat in terms of human health impact. And like the rest of the meat industry, cultivated meat advocates are not working to undo inequities in public health. In fact, cultivated meat is expected to initially cost more than conventional meat, though industry advocates hope that consumer prices will be competitive.

The environmental impact of cultivated meat is unclear, as it is still in a prototype or test-market phase of development. Researchers using a 1,000-year model found that while cultivated meat may have much lower methane emissions than the existing beef industry, its large-scale production could result in a long-term increase in carbon dioxide emissions.

By contrast, conventional meat production is a proven major cause of environmental pollution that goes far beyond just the emission of greenhouse gases.

No animals are killed when cultivated meats are made—though open questions remain about the process: for example, how ethical is it to take starter cells from live, non-consenting animals? Will companies continue to use fetal bovine serum as a growth medium? The primary appeal of cultivated meat is that, unlike industrial agriculture practices, its growth does not depend on the mistreatment of chickens, pigs, cows, fish, and other animals raised for consumption.

Out of concern for harmful animal agriculture practices, cultivated meat proponents created a new way to make it easier for people to eat meat—one that eliminates the need for concentrated animal feeding operations and animal slaughter. Yet the incrementalist nature of this market-based and industry-led reform does not change people’s mindsets about human and nonhuman animal liberation. For this reason, cultivated meat has given movement thinkers a moment of pause.

In contrast, the ethics of conventional meat is relatively clear for animal advocates.

Some religions have rules for how conventional meats are to be prepared, or whether certain types of meat should be eaten at all. For example, Judaism and Islam have kosher and halal meats. Meanwhile, it is not uncommon for adherents of Hinduism and Buddhism to have vegetarian diets. Rastafarians and, periodically, Ethiopian Orthodox Christians and Coptic Christians also follow vegan diets.

The question of whether cultivated meats will be considered edible for traditional religions is still open. Some Jewish business and faith leaders have begun to try to answer the question.

The funding for cultivated meat is primarily from venture capitalists who are seeking to profit from their investments—including investors from Silicon Valley, finance, technology, corporate, biotech, food tech, food, and agriculture, as well as impact investors.

The funding for conventional meat is built into the established food system, which depends on government subsidies and externalized costs, such as the exploitation of farmers and workers to raise animals and run meatpacking plants.

Dozens of companies around the world are reportedly preparing different parts of the supply chain to make cultivated meats at a large scale. Some things they are working on include immortal cell lines, scaffolds to help turn cultivated meats from a paste to a steak, and growth media.

When Will Cultivated Meat Make It to Market?

Cultivated meat was sold at a private event in a Singapore restaurant in 2021. Other countries have yet to decide how they will regulate cultivated meat.

Cultivated meat is fundamentally a response from big business to consumer concerns about the unjust treatment of more than 90 percent of the farm animals raised for meat. Like the new Impossible Burger or Beyond Burger, cultivated meat is an industry-led technological innovation that might make it easier for omnivores who care about nonhuman animals to more closely align their values with their actions.