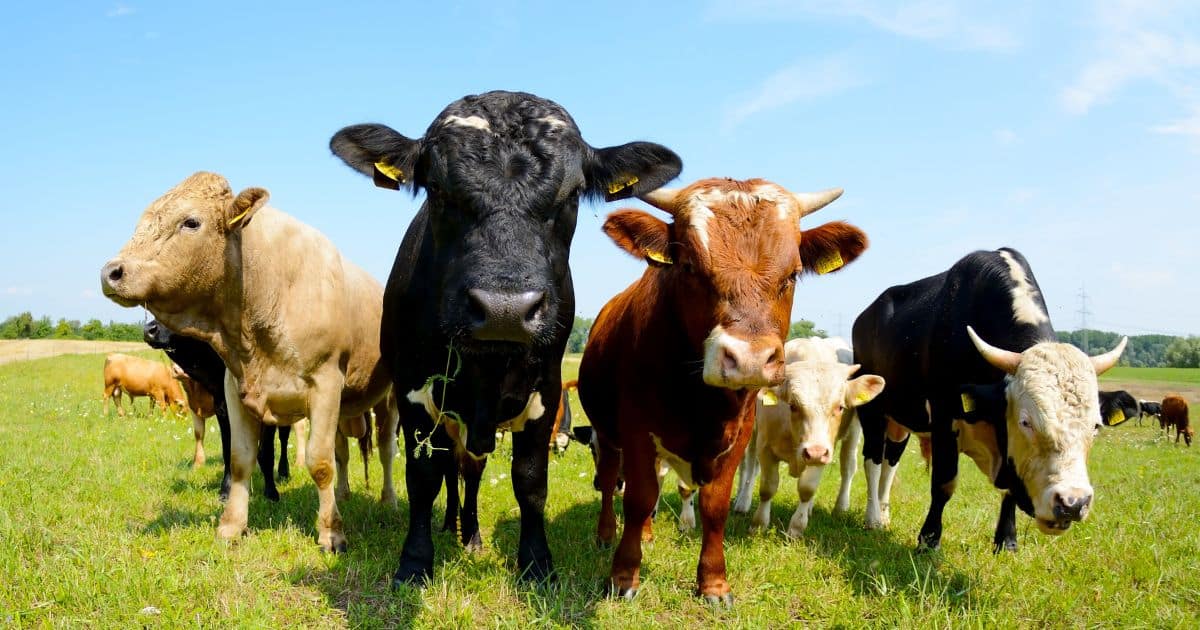 Climate change is no longer a crisis of the future. Here’s what we are seeing now — soaring temperatures and extreme drought are killing farmed animals and decimating harvests across the globe. Climate scientists and organizers have long been pleading with world leaders for change. That makes sense — most solutions must come from governments and institutions — but there is also a simple and powerful form of action available for individuals right now — dietary change.

Eating less beef and more plants, along with wasting less food, are some of the most effective forms of household climate action, according to Project Drawdown. It order to appreciate why dietary change can be so effective, it helps to understand the link between animal agriculture and climate change.

Over 70 billion land animals are raised and killed every year for food in processes that cause extreme environmental damage.

The animal agriculture industry is currently one of the largest producers of greenhouse gases in the world, making it a serious contributor to the environmental destruction we’re now seeing unfold.

How Does Animal Agriculture Contribute to Climate Change?

Greenhouse gases like carbon dioxide, methane and nitrous oxide trap heat from the sun and prevent it from being released into space, causing damage to the atmosphere.

Methane gas is one of the most potent of these greenhouse gases, as it’s extremely effective at trapping heat. The focus on limiting greenhouse gas emissions tends to be on carbon dioxide emissions, which stay in the atmosphere for longer, but over a timescale of 100 years methane is 28 times more powerful. And one of the largest sources of global methane emissions is farmed animals, specifically cattle.

Cows, sheep and goats all emit significant amounts of methane gas when they belch, a byproduct of their ruminant digestive system, in a process called enteric fermentation. Methane is released into the atmosphere from these belches (and also from dairy and hog manure), where it adds to already dangerous levels of greenhouse gases.

Another greenhouse gas produced in large quantities by the animal agriculture industry is nitrous oxide. This gas, which is 273 times more effective at trapping heat in Earth’s atmosphere than carbon dioxide over the course of 100 years, is released by the processing of animal manure. With such large numbers of animals being bred and raised for food production, manure is produced on a massive scale. The release of nitrous oxide is even more substantial in more intensive agricultural operations where large amounts of manure are stored within confined, and therefore low oxygen, environments, because the manure produces more of the gas when it breaks down in anaerobic conditions.

In addition to the harmful emissions it directly produces, animal agriculture also contributes to the climate crisis through deforestation, as increasing global demand for beef and dairy leads to agricultural land expansion. This is particularly evident in the Amazon rainforest, where cattle ranching has been responsible for 80 percent of deforestation. Much of the deforested land is used either for beef or the production of soy, a common ingredient in animal feed. As the number of animals raised by the agriculture industry continues to rise, so does the volume of animal feed harvested, all of which adds to increased deforestation in order to expand farming operations.

Large-scale deforestation has severe environmental implications. As vast areas of forest are torn down or burned, large quantities of carbon dioxide are released into the atmosphere. The loss of forests also depletes the earth’s capacity to store carbon, meaning that carbon dioxide from other sources is more likely to pollute the atmosphere. The animal agriculture industry is driving this deforestation, cutting down what was once one of our strongest defenses against climate change.

Animal agriculture is a significant contributor to climate change. The production of meat, eggs and dairy products is responsible for at least 16.5 percent of the world’s greenhouse gas emissions. To prevent climate disaster while also feeding the earth’s rising population, we will need to produce food more sustainably. This goal is going to be extremely difficult to reach unless we substantially change the way we produce food, with far less reliance on animal agriculture.

Although the agriculture industry is not the only sector contributing to the climate crisis, it is one of the most significant. The environmental impact of animal agriculture is severe enough that even if the use of fossil fuels were eliminated entirely, we would not be able to prevent a climate disaster without reducing food-sector climate emissions.

The scale of the industry’s impact also means that moving away from animal agriculture to a food system more focused on plant-based foods and alternative proteins could make a substantial difference in limiting climate change and protecting our environment.

Although the impact of animal agriculture on climate change has been scientifically recognized, the issue does not often get the same attention as factors such as fossil fuels and transportation. In order to reach net zero goals and have a realistic chance of averting climate disaster, drastic changes need to be made to the way we produce food.

To prevent a disastrous level of climate change we need to drastically cut our greenhouse gas emissions, and our dietary choices have the potential to help us do this. One 2018 study published in Nature found that a global shift toward flexitarian plant-based diets could mean that emissions in 2050 were 52 percent lower than otherwise projected.

In order to see the fall in greenhouse gas emissions that we need, dietary changes will of course need to be significant and widespread. This means that before we see substantial change, more investment likely needs to be made in the production of alternative proteins, and dietary change needs to be accorded the same importance as other methods of mitigating climate change. On an individual basis though, switching even a single meat-based product for a plant-based alternative really does make a difference. One study found that plant-based burgers, for example, are responsible for up to 98 percent less greenhouse gas emissions than burgers made of beef. Another found that replacing beef with plants would reduce the greenhouse gas emissions of the average American diet by 96 percent.

The substantial effects that dietary choices have on the environment gives us an opportunity to make a difference in our individual impacts on climate change. By reducing or eliminating animal-based food sources from our diets, we can make a significant contribution to limiting food-sector greenhouse gas emissions.

A global shift towards a more plant-rich food system would spare land and limit climate pollution. For this to happen, we need to eat less beef and increase public investment in meat alternatives. Because animal agriculture is a key contributor to climate change, drastic changes need to be made to limit global warming and feed the planet’s growing population.