You’re driving down the interstate highway listening to your favorite song and eating a hamburger when, suddenly, traffic comes to a halt. While waiting for traffic to move again, you gaze out of your passenger-side window as a semi-trailer truck pulls up next to you.

Your eyes focus on the contents of the truck, and from within the slotted steel bars, dozens of eyes stare back at you. Comprehending what you are seeing, you excitedly exclaim, “Cows!”

You admire their pink noses pressed to the metal. You take a moment to daydream about how much you love cows and their big, beautiful eyes, which are protected by those irresistibly long lashes. You recall a Youtube video you recently watched involving a cow playing fetch with a ball, much like your dog does. Ahh, cows are the best, aren’t they?

Traffic starts to move again, breaking you out of your cow-admiring trance. You take one last look at your beloved cow friends and go back to eating your hamburger, all without skipping a beat.

If this sounds normal, you are not alone. Most people are disconnected from their food sources and the meat, dairy, and egg industries like it that way. Showing the truth of how animals are raised and slaughtered is bad for business. Instead, they slap images of happy animals and rolling green pastures on their cartons and wrappers to give the illusion of freedom and contentment. This sales tactic is called humane-washing.

Those images of happy farm animals are not a reality for the billions of animals killed in America for food each year. The cows in transport you passed on the highway likely did not come from rolling hills and definitely weren’t heading to a life of freedom on a sanctuary. They were heading to slaughterhouses, and you witnessed one of their final moments alive.

Even if the cows you passed on the highway did come from luscious prairies and were treated nicely by the farmers who bred them, their fate would be the same as the billions of farmed animals that died before them. They would be forced onto the same blood-stained kill floors and feel the same sharp blade pierce their skin. “Humane meat” is an oxymoron and simply does not exist—there is no kind way to end the life of someone who does not want to die.

Animal transportation on the highway is the only glimpse many of us get into the secretive meat industry, but we never give much thought to where those trucks are actually heading.

Approximately 72 billion land animals around the world are slaughtered for food every year. Shockingly, 99 percent of food animals in America are bred inside large buildings, known as factory farms, where they never experience sunlight or fresh air. These animals are enveloped in darkness or dim artificial lighting and their lungs inhale ammonia and dust. Animals live this way for months until they are forced onto transport trucks to endure an arduous journey in extreme heat or cold to the slaughterhouses where they are killed.

Animal transport trucks are a common sight on most highways. These trucks are filled with rows of pigs, cows, or chickens, or worse—they are empty from a recent drop-off. What you might not realize as these trucks pass is that those little noses pressed against the metal will only live for another few hours, possibly days. Once the animals arrive at their destination, it is only a matter of time before they are killed.

When we hear stories on the news about these transport trucks overturning on the highway, everyone’s hearts ache for the innocent lives affected. People stop thinking about why the animals were being transported and instead focus on how sad it is that animals were injured or killed on the road. People get upset when animals are killed right in front of them, but when it happens behind closed doors at the hands of the meat, dairy, and egg industries, it suddenly becomes an out-of-sight, out-of-mind situation.

In the video above, in which a semi-trailer truck overturned with a truckload of calves, some calves died and many were injured. The “rescued” calves were likely sent to a slaughterhouse within hours of the accident. The one man in the video who stated that he was an animal lover and was saddened by the event first referred to the animals as “cows” and then quickly switched to using the term “cattle.” Could this change in tone demonstrate how quickly our brains panic once we challenge societal norms?

Why is it that most people would never willingly harm an animal, but continue supporting the industries that routinely exploit and kill millions of them each year? Until more people start questioning where their food comes from and how it is produced, innocent animals will continue to live stress-filled lives within factory farms. Countless more animals will be killed simply because of their species and the roles humans have assigned to them.

If you currently eat meat, you are a part of the majority. You have likely never really questioned why you eat meat, having simply enjoyed it for as long as you can remember. Your elementary school textbooks may have explained that a balanced diet includes animal proteins and cows’ milk. If you ever asked your parents where meat comes from, they probably gave you a vague, unalarming answer so that you wouldn’t get upset, because no child inherently wants to harm an animal.

“You put a baby in a crib with an apple and a rabbit. If it eats the rabbit and plays with the apple, I’ll buy you a new car.” ― Harvey Diamond

Adults, unlike young children, can do their own research and make their own decisions. Eating meat, drinking milk, and wearing leather are deep-rooted societal norms, but increasingly more people are concerned with animal welfare, environmental sustainability, and their own health. The power to make change lies within you as a free-thinking, autonomous individual.

Our ancestors ate meat. Many meat-eaters use this fact to justify their own consumption habits. “They ate meat, so we can too.” Let’s roll with that belief for a moment. When was the last time you hunted your own food with a spear or bow and arrow like our ancestors did? Let’s say you did, in fact, just kill an animal with your bare hands in the wilderness; chances are, you do not only consume meat you have hunted every day. You most likely visit restaurants and grocery stores at some point.

Modern humans eat meat purchased with money from stores and restaurants. These purchases are supporting suppliers like JBS, Smithfield, and Tyson—the largest meat processors in the United States. All three of these companies have an exhaustive list of undercover investigations and scandals regarding animal welfare and public health concerns. Modern animal agriculture has little in common with the hunting and gathering tactics of our ancestors. These large companies view animals as products, not living, breathing beings.

If you are truly an animal lover, it is hypocritical to justify forcing an animal into existence, removing them from their mother, keeping them in a dark building, growing their body so large that they can barely stand, and ending their life just so you can have one quick meal. People who eat meat, dairy, and eggs are actively supporting this inhumane process—even if the products are organic, cage-free, or free-range.

It is normal to feel uncomfortable by this inquiry since you probably have not given much thought to where your food truly comes from. People who have changed their lifestyles to reflect their morals often feel overwhelmed at first. Understanding that you have been unknowingly supporting unimaginable cruelty is a heavy realization.

Meat comes from animals, each of whom have unique personalities and quirks, not inanimate objects. The meat and dairy industries do not want consumers to make this connection because most humans have a desire to help the innocent and oppressed. Those barns are filled with animals who deserve to be free to live out their days in peace rather than be slaughtered for your steak. If more people viewed animals as individuals with a desire to live, these industries would be forced to address their fatal shortcomings. 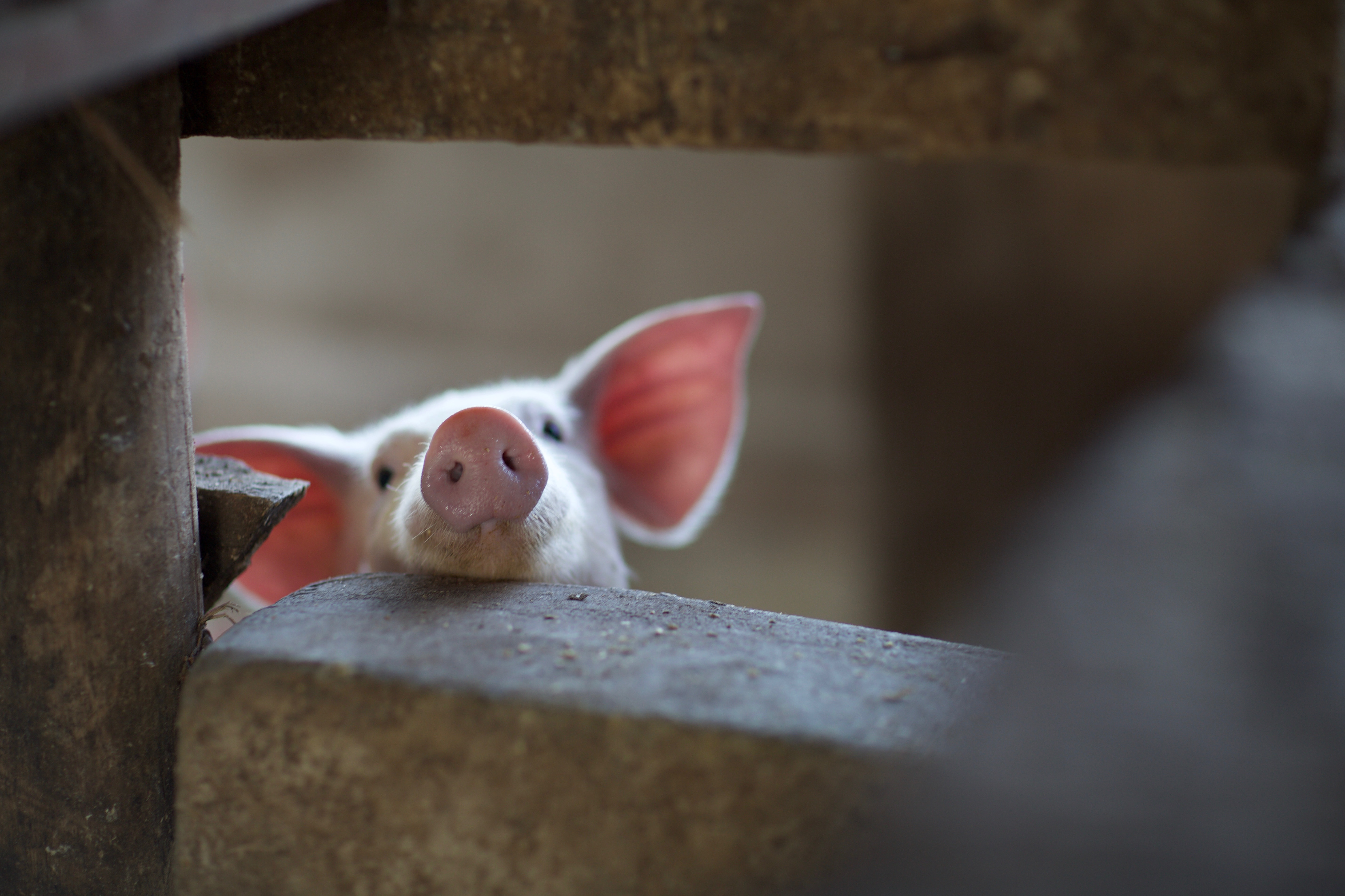 If an injured chicken—or any animal—were to hobble up to your house, chances are you would call a veterinarian to help the animal heal rather than take the chicken out back and slaughter them for dinner. If the former is true, consuming other chickens is hypocritical. Why do we love some animals and eat others?

The former question is not asked enough. It is time to address the hypocrisy in our society and take responsibility for our food choices and their sources. You can start living a more compassionate life today by ending your support of the exploitative meat and dairy industries that are harming the animals you claim to love.

Hopefully the next time you pass a semi-trailer truck full of cows with food in your hand, it will be a veggie burger instead.